New York is one of the top 10 most expensive states in America for car insurance. In fact, auto insurance premiums in New York State are 11% higher, on average, than in the rest of the country. Fortunately, by shopping around and comparing providers, you can obtain the best car insurance rates in New York whether you’re in Manhattan or on the shores of Lake Ontario. 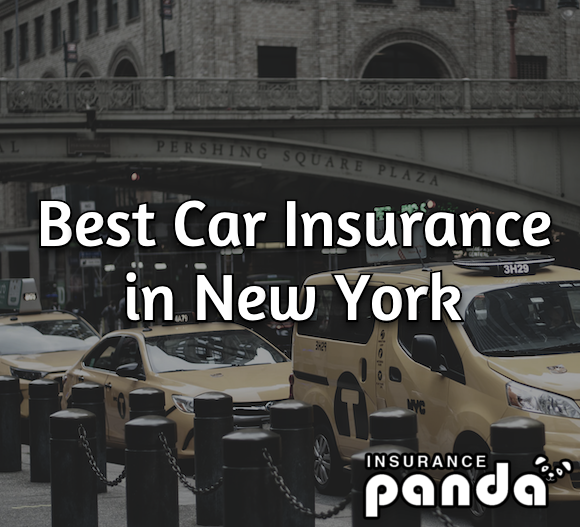 If you qualify for membership, then USAA offers the best combination of value and customer service in New York. With average car insurance premiums under $1,500 per year, USAA is known for providing strong customer service and claims satisfaction without breaking the bank.

GEICO tends to be one of the cheapest car insurance providers in most states. The company is one of America’s largest and cheapest insurers. Today, GEICO offers low prices in New York, with drivers paying roughly $1,634 per year for New York auto insurance, on average.

Allstate is another large and well-known insurance company across the United States. Allstate offers cheap car insurance in New York relative to other providers, with drivers paying around $1,711 per year for full coverage car insurance.

Like other large providers on this list, State Farm charges competitive insurance premiums across New York, competing with companies like GEICO, Allstate, and Travelers while charging premiums of around $1,853 per year.

While most other companies on this list are available nationwide, New York Central Mutual (NYCM) is exclusively available in New York, where the company charges $1,798 per year, on average, for full coverage car insurance. Approximately 3% of drivers in New York are insured with NYCM.

Progressive is popular for drivers in city and rural areas of New York, with drivers paying roughly $2,196 per year for car insurance, on average. Although not as cheap as the top-rated options on our list, Progressive is particularly affordable for drivers with an at-fault crash or DUI in New York.

MetLife is an international insurance giant headquartered in New York, so it makes sense the company would offer strong insurance service in its own backyard. MetLife charges drivers in New York premiums of around $2,091 per year, on average. They’re relatively affordable while offering good customer service and claims satisfaction.

All vehicles registered with the New York Department of Motor Vehicles must maintain certain minimum car insurance requirements, including:

All numbers above are minimums. Many drivers in New York exceed these minimums for added protection.

New York is one of 12 states in America that uses a no-fault insurance system. Under this system, drivers make a claim through their own insurance company after an accident regardless of fault. Your insurer covers your own bills. If the other driver was at-fault, then your insurer may negotiate with the at-fault driver’s insurance company for compensation.

Driving Without Insurance in New York

If you are caught driving without insurance in New York, then you will be penalized under Section 319 of the New York Vehicle and Traffic Code. You will receive a citation, and your license will be revoked for at least one year. You also need to pay a fine of $150 to $1,500 or spend 15 days in jail. To reinstate your license after the one year revocation period, you need to pay a civil penalty of $750 to the DMV.

Overall, New York has some of the strictest penalties against uninsured drivers. The state also has one of the lowest rates of uninsured drivers in the United States. While other states charge a small fine for driving without insurance, New York takes away your license and fines you hundreds of dollars.

You can expect to pay significantly higher rates for car insurance in New York after receiving a DUI. Fortunately, some companies treat DUIs less seriously than others, only raising rates by 40% compared to normal car insurance:

All rates above are based on minimum liability plans. These plans meet minimum New York car insurance requirements without protecting your own vehicle (say, with collision or comprehensive coverage).

New York is a no-fault state, although fault still matters after an accident. Based on your number of recent at-fault accidents, you will pay higher rates for car insurance than drivers with a clean record.

Fortunately, car insurance companies charge different rates for at-fault accidents, and some providers are less strict than others:

All prices above are based on minimum liability coverage with no collision or comprehensive coverage.

Some car insurance companies ignore a single speeding ticket, especially if it’s a minor violation. Others take any excuse to charge higher rates, including one or more speeding tickets.

The best insurance companies in New York for drivers with one or more speeding tickets include:

The rates above are sample rates for full coverage car insurance (including collision and comprehensive coverage).

The best car insurance companies for young drivers in New York include:

The rates above are based on full coverage car insurance policies (including collision and comprehensive coverage) for a 25-year old driver with a clean record. If you are younger or have violations on your record, then you’ll pay higher rates.

Fortunately, some car insurance companies care less about credit than others:

All estimates above are based on full coverage (including comprehensive and collision coverage) for an average driver.

New York is one of the few states in America with no SR-22 or FR-44 insurance requirements. In other states, drivers may be required to obtain an SR-22 certificate to verify they meet the minimum required car insurance limits in the state.

Some drivers may need an SR-22 certificate after a DUI or multiple at-fault accidents within a short timeframe, for example. You can obtain SR-22 insurance through any major insurance provider.

Fortunately, none of these SR-22 rules apply to drivers in New York. High-risk drivers still pay higher rates for car insurance in New York, although they do not need to prove financial responsibility with an SR-22 or FR-44 certificate.

If you are a high-risk driver that does not qualify for auto insurance on the regular marketplace, you might be able to find insurance through the New York Automobile Insurance Plan, which helps riskier drivers maintain legal insurance coverage.

Conclusion: How to Find the Best Auto Insurance in New York