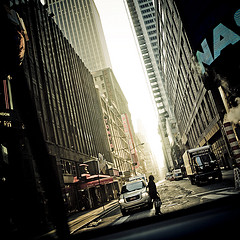 Like many states, New York was on a mission over the holidays. While many residents were out doing their holiday shopping, police officers were also out in shopping for a different item: dangerous drivers. It has become commonplace now for states to up their police force during the holiday season. Law enforcement knows that more people will be on the road more often and will likely be doing a lot of traveling. This means that the chance of an accident increases significantly and with more drivers around, the chance of an accident becoming serious is ever-present.

With the presence of more police officers on the road, the idea is that people will be more likely to follow the laws. But we all know there are some people who just can’t follow the rules and New York police prove that they will catch you. In their campaign, which started on December 14 and lasted through January 1, police issued more than 33,000 traffic tickets as well as made 538 DWI arrests. In addition to an increased presence on the roads, InsuranceJournal.com reports that New York set up 29 sobriety checkpoints, 12 details aimed at catching underage drinking, 10 “saturation details” which is a detail aimed at areas known for drunken drivers, and 41 additional officers were dedicated to finding drunk drivers. Keeping dangerous drivers off of the roads is one of the most important ways to make sure that other drivers stay safe.

No one is perfect though and there’s a chance that you may have gotten a speeding ticket in your lifetime. We all have daily responsibilities and sometimes they take priority over the 35 mph speed limit sign. This doesn’t mean that you’re a terrible driver but it can affect your driving record, which in turn will affect your insurance rates. If you are going to disobey the driving laws, you already know that you stand a chance of getting a ticket but you should be aware of other long-lasting effects your decision can have.

Chances are, most of us have had a ticket in our lifetimes and you know that the fees you have to pay can vary depending on what your violation was. Mainly, tickets are looked at as nuisances, especially if you have to go to court. That means not only paying the ticket fee but also paying court costs, which can sometimes exceed the actual amount of the ticket.

If you get a speeding ticket, for example, the fee for going 7 miles over the speed limit is going to be much different than if you are caught going 20 miles over the speed limit. You also know that if you are drunk while doing it, that’s going to be one expensive ticket. With speeding tickets, most states will set a flat rate and then build upon that based on the seriousness of the offense. Also, states have the right to tack on additional fees to your ticket. By the time this all adds up, your money is leaving your wallet faster than you were even driving. And you get points on your driver’s license too.

Average Increase in Rates by Violation

How Points Affect Your Driving Record

Some states have started using the point system to keep track of their drivers and it’s important to know how you get points, how you lose points, and what they can mean for you. Normally, accumulating points is considered to be a good thing. In most games, whoever scores the most points is considered the winner but if you have a lot of points on your driving record, you’re the loser. In New York, the Department of Motor Vehicles (DMV) issues points to a driver based on the different types of traffic violations that you accumulate. The more points you have, the more times you have seen those flashing lights in your rearview mirror.

Now, these points are fluid and aren’t a plague you have to carry with you for the rest of your life but different violations carry different time periods for a point’s life. Over the course of time, if you prove yourself to be a safe driver and don’t receive any violations, the points you accumulated will be removed from your record. This time period will vary state by state and be based on the seriousness of the offense. You are always entitled to your personal driving record and view your points at any time but other organizations like the DMV and your insurance company can too. If the DMV notices that your point level is too high, you could risk the suspension or revocation of your license. New York charges certain drivers a “driver responsibility assessment” fee which can range from $100 to $750.

Point Increase by Violation in NYS

That’s a high price to pay and these fees normally reoccur so it can haunt for three years. There are certain ways that you can get points removed from your record. Many state DMV’s offer driver improvement courses that are worth a certain point level but they aren’t offered on an unlimited basis so your point level can only increase incrementally.

The only way to avoid accumulating points on your driving record is to stay safe and obey the laws. This is what your insurance company wants you to do. If you have multiple traffic violations, leading to points on your record, your insurance will know about it. They have to review your driving record anytime they renew your policy and if they start to notice a trend, it’s highly likely your insurance rates will go up. The worst-case scenario is a cancellation of your policy and then you’ve got to shop for new insurance. Ultimately, disobeying the law has lasting consequences and the whole point is prevention. If you can obey the law even when it seems more convenient to step on the gas pedal, you are going to a lot of headaches down the road.