What Happens With Insurance If You Are At-Fault in an Accident?

If you’ve been involved in an at-fault collision, then you can expect to face higher insurance prices, among other consequences. Insurance companies look at your driving record to calculate premiums. Accident history and claims history are two of the biggest factors that determine how much you will pay for auto insurance. A single at-fault collision, therefore, could raise your rates drastically.

What Happens After a Collision That’s Your Fault 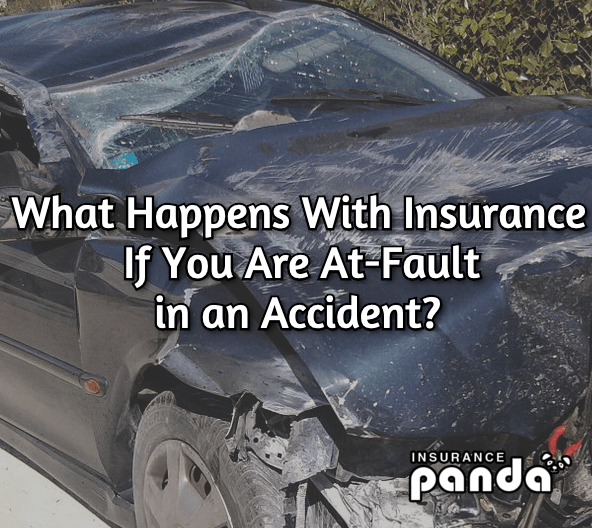 If you were involved in a collision, then your insurance company will work to determine who was at fault for that collision.

If it was a single-vehicle accident, then your insurance company will assume you were at-fault for the collision.

Some people assume that if you hit somebody from behind, you’re automatically at fault. Others think that the person making the left turn is always at fault. These are incorrect assumptions.

If there were multiple vehicles involved, then there will be an investigation process to determine who was at fault.

In most cases, both drivers are at fault, but one driver is more at fault. The driver who is more than 50% at-fault for the collision is considered to be the “at-fault driver”.

How Much Will Insurance Rates Rise After an At-Fault Collision?

An at-fault collision will almost always raise your insurance rates.

You already know your insurance was going up after your at-fault collision. But how much will it increase?

Typically, if you’re a clean driver and this is your first at-fault collision, you can expect insurance rates to increase from 10% to 40%.

After a Second At-Fault Collision, Insurance Rates Will Rise Further

Insurance companies are relatively lenient with your first at-fault collision. After your second collision, however, they won’t be as lenient.

After a second at-fault collision, you can expect insurance rates to rise anywhere from 40% to 150%. If you were involved in two serious at-fault collisions, and you start to get the reputation of a high-risk driver, then your insurance company might even cancel your policy altogether.

Meanwhile, some of the states with the highest average insurance rate increases included California, Delaware, Georgia, Idaho, Kansas, Massachusetts, Minnesota, North Carolina, South Dakota, Utah, and Washington, all of which had average rate increases of 40% or higher.

View Their Data Below:

How Long Does an At-Fault Collision Stay on Your Record?

An at-fault collision will stay on your driving record for years. The specific length of time, however, varies between states and situations.

However, most minor accidents in California will only stay on your driving record for three years.

Overall, most states keep a traffic violation – like a minor at-fault collision – on your record for about 3 to 5 years.

If you were involved in a more serious at-fault accident that caused significant damage or bodily injuries, however, then you can expect to pay higher insurance prices for a longer period of time – especially if you were convicted of DUI. In Florida, for example, alcohol-related violations stay on your record for 75 years.

After an accident disappears from your state DMV’s record (say, after 3 to 5 years), it will no longer affect insurance rates. Your insurance premiums will also steadily decline after each year of clean driving.

Insurance companies use your driving record to determine your risk factor as a driver. If you have a history of one or more at-fault collisions, then you’re a higher-risk driver than someone with a clean record.

You can expect an at-fault collision to increase rates by about 30%, with the collision staying on your record for approximately 3 to 5 years. If you were convicted of driving under the influence during or after the at-fault accident, then you may face higher insurance premiums for as long as 10 years.