How Much Does Insurance Go Up After a DUI?

So you were caught driving under the influence. Drivers face a number of serious consequences after receiving a DUI or DWI. One consequence is that you’ll pay higher insurance rates.

How much can you expect insurance to go up after a DUI? How much does a DUI raise your rates? How much higher will your premiums be after a DUI? Below, we’re answering these questions and explaining everything you need to know about higher insurance prices after your DUI. 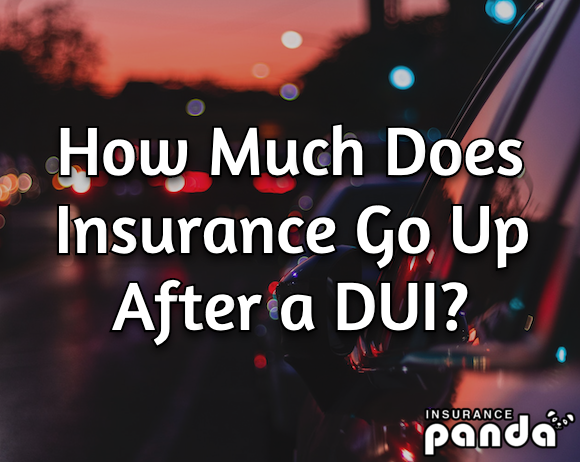 Most studies show that insurance will be about 35% higher after your first DUI conviction.

ValuePenguin.com, for example, used an example of a 30-year-old single man driving a 3-year old Toyota Corolla to compare insurance rates before and after a DUI.

Keep in mind that each driver will receive different rates based on their driving record, credit score, age, where they live, etc. Here’s how other data showed the effects a DUI has on your insurance rates:

All of the above assumptions are based on the fact that this is your first DUI. If this is your second, third, or fourth DUI, then you can expect insurance rates to continue rising.

How Long Will Higher Insurance Prices Last After a DUI?

At-fault accidents, speeding tickets, DUIs, and other incidents always raise insurance premiums. However, they all disappear from your record eventually.

How long does it take for a DUI to stop affecting your insurance rates?

Insurance companies have different policies in terms of the length of time your premiums will be affected. GEICO, for example, requires 35 months of clean driving before your premiums are no longer affected by your DUI. With other companies, the effects of a DUI might last four years or longer.

The consequences of a DUI vary widely between insurance companies, states, and situations.

Most states, for example, require a driver’s license to be suspended for 30 to 90 days immediately after the DUI. Some states increase that to a six month or 12-month suspension.

If you get additional DUIs, you might even have your license suspended for several years.

DUI consequences can also vary between cases. If you were convicted of DUI after injuring another motorist in an at-fault collision, for example, then you’ll face more severe consequences than someone who was charged with a DUI after a check stop.

Depending on the severity of your DUI, your insurance company might label you as a “high risk” driver, putting you in a significantly higher insurance bracket.

Age can also play a factor. Younger drivers convicted of a DUI will experience a more significant increase in insurance prices than an older driver. Your credit score and other factors can also play a role in the cost of car insurance after a DUI.

Most DUI or DWI offenders will require an SR-22 form. You can get this form after your 30 or 90-day suspension is complete.

An SR-22 Proof of Insurance form is a form that your insurance company is required to file with your state’s DMV to verify that you have valid insurance coverage.

You’ll typically need an SR-22 form for three years after an incident involving a suspended license.

DUIs Will Cost You Approximately $10,000

Getting a DUI is an expensive mistake. Typically, getting caught driving under the influence will cost you about $10,000 by the time everything is off your record.

In addition to higher insurance prices, other costs can include getting an SR-22 form, fines, legal fees, or buying a breathalyzer ignition system for your vehicle.

Conclusion: How Much Does a DUI Raise Your Insurance?

You did something stupid and you got caught. It’s an expensive mistake – but it doesn’t have to be as expensive as you might think.