The company sells insurance throughout New York, using a network of agents to cover all types of homeowners and drivers. 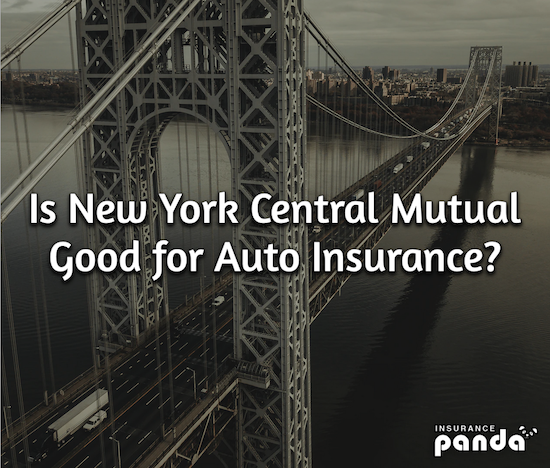 New York Central Mutual is a property and casualty insurance company founded in 1899. The company is based in central New York and employs 800 people across the state.

Backed by 120+ years of experience, New York Central Mutual continues to insure thousands of homeowners and drivers across the state.

Renters Insurance: Renters can protect their possessions and liability even if they don’t own their homes. New York Central Mutual offers renters insurance throughout New York.

Here are some of the auto insurance coverages available through New York Central Mutual:

Bodily Injury Liability Coverage: Required in New York and most other states, bodily injury liability coverage covers damage you cause to other people in an accident. It can cover medical bills, lost wages, and other damages for which you are liable after an accident.

Property Damage Liability Coverage: Also required in New York and most other states, property damage liability coverage covers damage you inflict to other people’s property – like their home or vehicle – in an at-fault accident.

Uninsured and Underinsured Motorist Coverage: Approximately 5% of drivers in New York are uninsured. Although that’s one of the lowest rates in the country, New York Central Mutual sells uninsured and underinsured motorist coverage for added protection.

Drivers in New York have hundreds of options for car insurance. You can choose small, local companies like New York Central Mutual. Or, you can choose larger, nationwide providers.

120+ Years of Experience in New York: New York Central Mutual was founded in central New York in 1899. The company has over 120 years of experience insuring policyholders across the state.

Local Service: New York Central Mutual employs 800 people in New York while maintaining multiple offices throughout the state. Many policyholders like the experience of dealing with a local, New York-based agent for their insurance needs – instead of a faceless nationwide firm.

Higher Prices: New York Central Mutual offers higher prices than most of its competitors in New York. Car insurance is already expensive in New York, and many find the company’s policies to be significantly more expensive than the competition, especially if you don’t qualify for discounts.

New York Central Mutual offers a range of discounts that can drop the price of your policy as much as 55%.

Electronic Payment Discount: If you pay your premiums electronically, you’ll get a discount on car insurance.

Driver Safety Training Course Discount: If you take an approved driver safety training course, then you can receive a discount on car insurance.

Student Away at School Discount: NYCM provides discounts to insured students who are living away from home while attending school full-time.

Bundling Discounts: NYCM offers homeowners insurance, renters insurance, auto insurance, and other insurance products. Bundling multiple policies together can save you money across all policies.

Homeowner Discount: Statistically, homeowners are less risky to insure than renters. NYCM provides a discount just for being a homeowner.

Paid in Full Discount: Paying your policy in full upfront (instead of monthly) can get you a discount on insurance.

Good Student Discount: Students who maintain an average of B or better could qualify for NYCM’s good student discount.

Clean History Discount: Drivers with a clean driving record with no speeding tickets or at-fault accidents could save on NYCM auto insurance.

New York Central Mutual Reviews: What Do Customers Have to Say?

New York Central Mutual is not one of the largest insurance companies in the United States or in any subregions, so it does not appear on J.D. Power’s annual insurance company rankings.

However, New York Central Mutual has a rating of A (Excellent) from A.M. Best, which assesses the financial strength of insurance companies. A rating of A is considered very good, especially for smaller companies like NYCM. A strong financial rating indicates that NYCM should have no trouble covering its liabilities in the near future.

New York Central Mutual has a rating of A+ on its Better Business Bureau page.

Independent review websites have mixed ratings for New York Central Mutual. Clearsurance reviews have given NYCM an average rating of 3.82 stars out of 5, for example, while WalletHub awarded NYCM a rating of 2.5 stars out of 5 based on 200+ reviews.

Overall, customers agree that New York Central Mutual provides effective car insurance and strong customer service to drivers across New York. Although some drivers feel NYCM has high prices, others are happy with the discounts they receive.