Is Amica Good for Car Insurance?

With the huge number of insurance companies out there, most of whom are seemingly spending millions of dollars in advertising money just trying to get your attention, it can be easy to forget about Amica. How good is Amica when it comes to auto insurance? 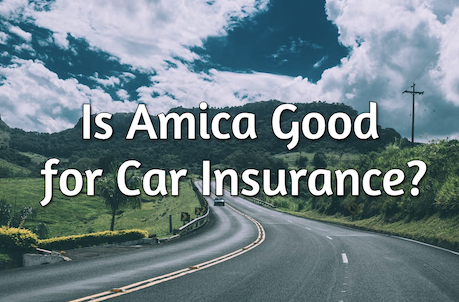 Amica’s full name is Amica Mutual Insurance Company. The mutual part of its name is not uncommon with insurance companies, but it’s still nice to see. Mutual insurance companies are owned entirely by their customers or policyholders. A portion of a mutual company’s profits each year is either paid back directly to its policyholders or applied to future policies to help reduce premiums.

Amica has its roots in Rhode Island and was founded in 1907, making it the oldest mutual insurance company that sells auto insurance. Since then, Amica has expanded to also offer homeowners (including condo and renters), personal umbrella insurance, as well as some other specialized policies such as weddings and some events.

Amica is licensed in 49 states, with the one exception being Hawaii. However, Amica operates more like GEICO than any other insurance company. Amica doesn’t have any local agents and operates solely through its headquarters in Rhode Island. It’s 3,000+ employees who handle everything from quoting questions to policy processing and claims.

You can get a quote online and Amica also has an online portal where you can pay your bills and look up policy information.

How Are Amica’s Auto Insurance Rates?

There are many factors that determine somebody’s car insurance rates, such as age, location, gender, driving history, type of vehicle, coverage selections, and credit score.

In fact, Amica can be more competitive for people with bad credit but a good driving history than many of the larger insurance companies.

How Is Amica With Claims and Customer Service?

Rather than striving to always be the cheapest auto insurance company for everyone, Amica puts a lot of its focus into delivering excellent customer service. In fact, it consistently receives awards and top honors for its claims and customer service.

Amica prides itself on always having an agent available for you to easily reach and answer questions. They also try to update you frequently during a claim, which can help put your mind at ease knowing that your claim is being worked on. When it comes to the claims check, many Amica customers report that they’ve received an amount that was more than they expected.

Of course, Amica doesn’t pay more money in claims than what is reasonable. They won’t pay $50,000 in claim money for a totaled 2011 Honda Civic.

It’s nice to have an insurance company that you don’t have to negotiate with, just to get a better check than what they originally wrote, and who doesn’t always fight tooth and nail for every cent.

One of Amica’s main goals is to have happy and satisfied customers, and they do this by having good customer service.

However, every insurance company in the United States has some negative reviews and unhappy customers. It’s the nature of insurance and claims to have situations where some people are unsatisfied with how the process went or the final claims check amount.

Which Discounts & Coverages Does Amica Offer?

Amica offers many of the most common discounts and coverages that other insurance companies have, although their list isn’t quite as extensive as some other companies.

Amica also offers many of the most popular additional coverages. Some of these include full glass coverage, which means you wouldn’t pay a deductible if you have a glass claim. Amica also has a solid roadside assistance program, which covers towing, fuel delivery, battery jumpstarts, winching, and other common roadside services. Additionally, Amica offers free lock replacement for lost keys, as well as free repairs of deployed airbags.

Amica Insurance has built an excellent reputation for outstanding customer service and claims service. It offers the most common discounts and coverage options, as well as some unique perks such as rewards.

If you don’t mind not having an actual agent or not having the full online capabilities of some of its larger competitors, it’s worth it to get a quote from Amica to see how they stack up against the rest.