What Are the Average Insurance Rates for a 16-Year-Old?

Today, we’re explaining everything you need to know about average insurance premiums for 16-year-old drivers.

The Average 16-Year-Old Driver Pays $2,600 Per Year for Minimum Coverage 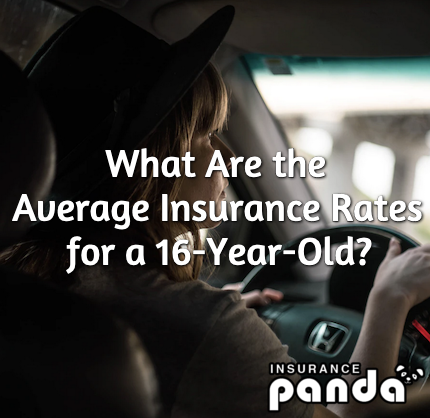 There’s no avoiding it: getting car insurance as a 16-year-old is expensive.

According to CarInsurance.com, the average 16-year-old driver will pay $2,593 per year for state minimum coverage. If you want to raise your liability limits or get full coverage, costs will be even higher:

The rates above are based on a teenager having his or her own insurance policy on a 2017 Honda Accord with a deductible of $500. Car insurance prices were taken in 10 different ZIP codes in each state, then averaged countrywide.

As stated above, the average full coverage rates for 16-year-old drivers in the United States is $6,930. Here is the breakdown by state:

Some of the reasons 16-year-old drivers pay high rates for car insurance include:

How to Get Cheap Car Insurance As a 16-Year-Old

You’re 16 years old and want to drive. That doesn’t necessarily mean you have to pay a fortune. There are ways to get cheap car insurance as a 16-year-old driver.

A defensive driving course can make you a better driver. Many insurers also give discounts of 5% to 10% for young drivers who have recently completed driver training.

Your parents may have had the same insurance company for 20 years, but they may not offer the best rates to 16-year-old drivers. It’s always cheaper to get listed under your parents’ policy. If you’re looking for your own policy, however, then shop around. Insurance premiums can vary widely between insurers.