Why Is Car Insurance So Expensive In New Jersey? 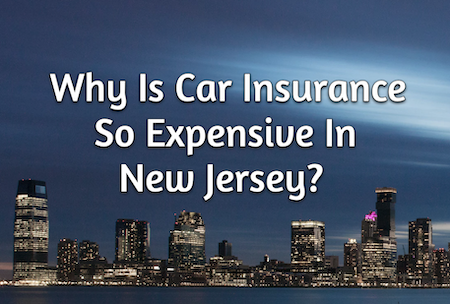 Car insurance is egregiously expensive in New Jersey for a variety of reasons. For one, New Jersey residents are jam-packed into a small, fairly urban area with ample traffic congestion. The fact that so many drivers are tasked with sharing roads in tight spaces with one another is problematic in and of itself. The close proximity to other drivers, sizable population, and resulting high frequency of auto accidents are a large part of the reason why New Jersey drivers pay more than others for auto insurance.

The Garden State’s heavily populated urban environment has resulted in an abundance of traffic. The comparably high number of people per square mile combined with the limited space has led to an incredibly high number of traffic accidents. However, there are other reasons why New Jersey drivers pay more for auto insurance than most other drivers. The state’s high cost of living combined with the average New Jersey driver’s comparably expensive taste in vehicles has the potential to result in an uber-expensive auto crash.

New Jersey’s standard auto insurance policy’s personal injury and protection clauses are absurdly expensive. New Jersey drivers are eligible for $250,000 worth of personal injury claims unless the driver opts for less. However, about two-thirds of all New Jersey drivers are eligible for this costly auto insurance benefit. Plenty of drivers could elect to reduce their coverage level to save money, yet surprisingly few actually do.

New Jersey is also a no-fault state. In a no-fault state, your insurer is required to cover your medical bills, no matter which party is responsible for the accident. Under the no-fault system, insurers are also required to pay for the medical treatment for any passengers also traveling in your vehicle (regardless of fault).

Are There Any Other Ways to pay Less for Auto Insurance in New Jersey?

If you are looking for a new car insurance company in New Jersey, consider using one of the following companies that are licensed to write private auto insurance policies in New Jersey:

The average New Jersey driver assumes a high coverage level is necessary to protect him or herself in the event of an accident.  The logic in paying for higher coverage is that most of New Jersey is an urban area in which there is a comparably high rate of crime and frequency of auto accidents.  The high crime rate combined with the increased likelihood of auto accidents is likely to spur that many more auto insurance claims. It is also important to note the state of New Jersey permits a comparably high Personal Injury Protection (PIP) coverage limit.  PIP is applicable to medical costs stemming from the auto accident. The high PIP level spikes the cost of car insurance that much more. All in all, the Garden State permits the second-highest PIP coverage level in the United States. Only Michigan drivers have a higher PIP coverage limit.

New Jersey is close to a number of large cities. New Jersey drivers often travel to New York City, Washington DC, Philadelphia, and other busy areas. These nearby cities are chock full of drivers, many of whom drive in a haphazard manner. As a result, New Jersey drivers are that much more likely to be involved in a car accident. From an insurance company’s perspective, hiking New Jersey drivers’ auto insurance rates is sensible simply because the chances of an auto accident are significantly higher than those for someone living in a rural area with comparably less traffic and people.

New Jersey’s auto insurance rates are higher than average due to its population density, crime rate, and minimum coverage requirements. While you might not be able to find cheap auto insurance in New Jersey, you can still find affordable coverage if you shop around. The best way to save on your auto insurance premiums is to comparison shop. Get quotes from multiple insurers by using our quote comparison tool at the top of this page, or contact insurers directly to see how much your premiums will be.