Can I Get Auto Insurance If I Have a Criminal Record?

If you have a criminal record in the United States, then you face many unique challenges – from employment to auto insurance. 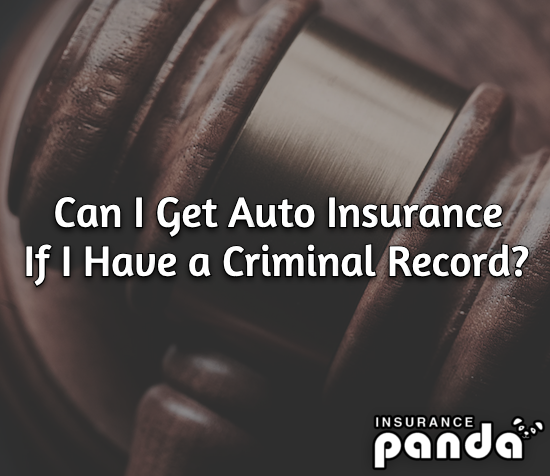 Today, we’re explaining everything you need to know about getting auto insurance if you have a criminal record.

Driving-related criminal convictions will impact car insurance. If you were convicted of driving under the influence, for example, then you will face higher car insurance rates. Your car insurance application may even be denied.

If your criminal conviction was not related to your driving habits, then your criminal record may not impact car insurance whatsoever. However, if you were criminally convicted of driving under the influence, reckless driving, speeding, or similar crimes, then you will face higher auto insurance penalties.

If you received a DUI, reckless driving, or speeding charge, then you are considered a high-risk driver. You have a history of engaging in dangerous driving behavior, and you have been criminally convicted of that behavior. Statistically, you’re a riskier driver for your insurer to insure, and your insurer will charge higher premiums.

Your motor vehicle report is different from your criminal record. However, it may display criminal convictions related to your driving habits.

Some of the things insurers can see on your motor vehicle report include:

States treat convictions differently. Some states allow insurance companies to view this information dating back 12 years, while other states prevent insurers from tracking information beyond 3 or 5 years.

How Long Does It Take for Criminal Convictions to Disappear from my Driving Record?

Depending on your state, most insurance companies can view this information dating back 5 to 7 years.

Certain states track serious convictions over a longer period of time. Many states track DUIs over the last 8 to 12 years, for example. If you were convicted of a DUI, then you might pay higher insurance premiums for over a decade.

All types of crimes can impact insurance rates – from minor speeding tickets to DUIs that caused multiple fatalities.

However, insurers consider the type of crime when calculating insurance premiums. In fact, they consider dozens of factors – from your claims history to your driving record to your ZIP code.

Similarly, some people are arrested for a crime but never convicted. Generally, arrests without convictions are expunged from your driving record, and your insurer cannot view this information.

Whether it’s a minor ticket or a criminal conviction, your history could impact future car insurance premiums.

How Much More Will I Pay for Car Insurance with a Criminal Record?

Statistically, here’s approximately how much you can expect to pay for car insurance with and without a criminal record:

All premiums are calculated per year. A driver with a clean record will pay around $1,400 per year for car insurance, while a driver with DUIs or reckless driving convictions will pay $2,500.

Best Car Insurance Company for Drivers with a Criminal Record

Some of the best car insurance companies for drivers with a criminal record include:

Other companies are relatively harsh towards drivers with a criminal record. Allstate, GEICO, and Liberty Mutual, for example, might double or triple insurance premiums after a criminal conviction or DUI.

For all of these reasons, it’s crucial to compare as many car insurance quotes as possible – especially with a criminal record.