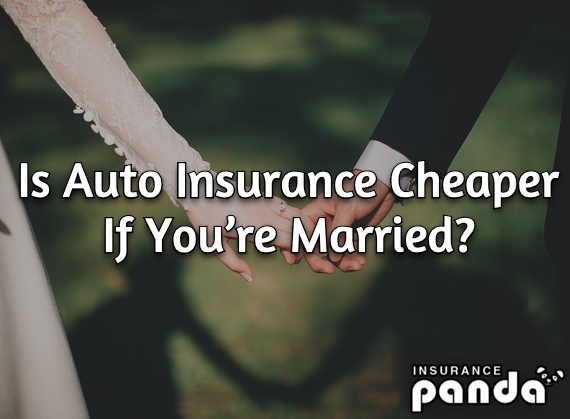 Dozens of factors go into the price of your auto insurance policy, including your driving history, your ZIP code, and your credit score. Many couples are surprised to learn, however, that their marital status also has a significant effect on the cost of insurance.

In most states, being married will save you money on car insurance. Furthermore, the auto insurance price difference between being married and single (including divorced and widowed) is relatively large, especially among younger drivers.

One report cited by CNBC claims that a 20-year old married driver will pay 21% less for car insurance than a 20-year old single driver.

Why Do Married People Pay Less for Car Insurance?

Insurance companies often cite a study from the National Institutes of Health published in 2004. That study showed that single drivers were twice as likely to get into auto accidents compared to married drivers. That’s why the difference in the price of car insurance is so significant. It’s not just a small reduction in auto insurance rates: it’s a big deduction because there’s a big change in risk.

Will Older Married Drivers Save Money on Car Insurance?

There’s a significant difference in the price of auto insurance across married and single drivers of all ages.

However, the difference is only really significant in your 20s. Young drivers who get married early can expect to save anywhere from 20% to 40% off the cost of car insurance.

Of course, insurance rates generally drop as you get older – so you’re still going to pay significantly less for car insurance in your 30s compared to your 20s.

Meanwhile, this gender difference actually flips in your 30s. Women between the ages of 30 and 55 are some of the riskiest drivers on the road, according to insurers. Men tend to pay less for insurance between ages 30 and 55 than women.

What About Domestic Partnerships and Other Living Arrangements?

So you’re not technically married – but you still want to save money on car insurance. What are your options?

Some car insurance companies offer specific discounts for domestic partnerships. You can expect similar discounts to what a married couple would receive. Stats back up the idea that drivers in domestic partnerships are less likely to make a claim than single drivers – so you can expect a similar drop in your insurance prices as you would if married.

Your rates are also likely to decrease if your partner is in a lower risk group than you, like if they meet the following characteristics:

If you and your partner drive two vehicles, then combining your two vehicles under the same insurance policy can save significant money regardless of your marital status.

Final Thoughts – Is Car Insurance Cheaper If You Are Married?

Remember: different insurers calculate risk in different ways. One insurance company might decide a single driver is a significantly higher risk than a married driver, for example, while the difference might not be as significant at another insurer.

By comparing multiple quotes, you can find your ideal insurance policy – regardless of whether you’re single or married.