How Do You Get Cheap Auto Insurance Rates After a DUI/DWI?

Finding cheap auto insurance after you have been convicted of DUI (driving under the influence) or DWI (driving while intoxicated) can be a bit tricky. If you decided to drive drunk and you got caught, chances are that you are going to need to obtain new car insurance when you start to drive again. 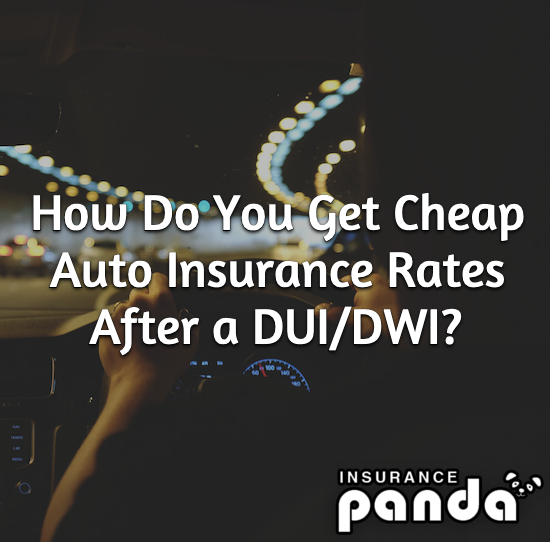 There are several reasons that you may need a new auto insurance policy. Your previous insurance company may have simply dropped your policy after your conviction. If the insurance company did not drop you, they most likely raised your premium rates to an astronomical amount.

Chances are that you are feeling like you do not have many options available when it comes to finding a car insurance policy after your DUI or DWI. However, despite what you may have heard, there are some options available. There are certain car insurance companies that do not punish a person as much as other companies when it comes to driving while intoxicated convictions.

The best overall option is to start getting quotes immediately from a bunch of different companies. Depending on the state that you live in and some other factors, obtaining quotes is going to be the only way to determine what your rates are going to be with your current record.

Why You Should Start Comparing Quotes

One of the best places to start is by getting quotes from several car insurance companies. This is a good idea because it will provide you with a large range of rates to consider. You will be able to simply eliminate the providers that have an extremely high cost. You can also determine which companies are not going to accept you as a client.

A national company such as Progressive or GEICO may have the cheapest rates in some areas but might be more expensive in different areas. There are some localities that have a local company that may offer better prices. Other places have companies that specialize in insuring high-risk or assigned-risk drivers. The only way that you are going to be able to determine which company is best for you is by shopping around and comparing quotes.

The process of getting several quotes will be the best way to go unless you already know of a company that is going to give a break on rates to a person that has a DUI. You are going to need to get your new driving record out there in order to see what kind of rates you are looking at.

Each state has strict laws against drunk driving. Each insurance company, however, will evaluate the risk of your driving as they want to. Your insurance rates are going to be based on several different factors. While having a DUI or DWI on your record is not good, it is just a single component of your record.

Insurers may increase your rates, require you to buy a high-risk insurance policy, cancel your current coverage, or simply refuse to insure you anymore. This all depends on how severe your driving offense was, how big of a risk you are as a driver, and your economic and social demographics.

When it comes to the majority of the major insurance companies, most of them use a similar type of formula in order to calculate the risk of a driver causing an accident in the future. The company will then calculate how much they will need to charge the driver on a monthly basis to ensure that they are not taking too great of a risk with their money.

Overall, the baseline rates for DUI offenders will be similar. However, this is just a starting point. From this base rate, the company will look at other indicators such as your credit score and other things that may be on your driving record. For example, a person that has a DUI conviction combined with bad credit is going to have a higher premium than someone who has excellent credit with a DUI on their record.

To get a better idea of how much your rates will change following a DUI, take a look at how a DUI conviction impacts rates at the top auto insurance companies:

Final Word on Finding Cheap Insurance After a DUI

There’s no way around it. Auto insurance compared are either going to deny coverage to someone with a DUI or charge a higher premium. The best way to get relatively affordable auto insurance after a DUI or DWI is to shop around for the best price. Some companies specialize in insuring high-risk drivers at affordable prices, but their coverage options are limited.