So you want to drive a fast car but don’t want to pay a fortune in car insurance. Fortunately, there are plenty of fast cars with cheap insurance premiums.

Generally, the world’s fastest cars tend to be the most expensive cars to insure. It costs thousands per year to insure a luxury vehicle, like a Lamborghini, Bugatti, Rolls-Royce, or Ferrari, for example.

However, plenty of cars are fast enough – yet still have reasonable car insurance premiums. For example, the Dodge Challenger and Fort Mustang GT Convertible are considered fast cars, although their insurance premiums are similar to the premiums paid on slower vehicles. 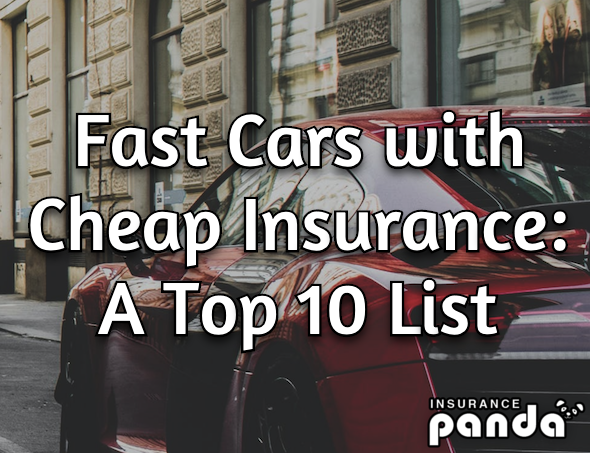 Like the Mustang, many drivers are surprised how low premiums can be on the Chevrolet Camaro. Depending on your state and situation, you could pay as little as $1,600 per year for car insurance on a Camaro. The car, like most others on this list, goes from 0 to 60mph in about 5 seconds, officially qualifying it as a fast car.

A Corvette tends to be cheap to insure despite qualifying as a fast car. Capable of driving from 0 to 60mph in around 4 seconds, the Corvette has insurance premiums of around $1,800 per year, making it one of the cheapest fast cars on our list to insure.

The Audi S5 is the high-performance version of Audi’s A5. It is available in multiple options, although it’s more affordable to insure than many fast cars. Priced around $2,000 per year for car insurance on average, the Audi S5 accelerates from 0 to 60mph in under 5 seconds without breaking the bank every month on insurance premiums.

The BMW M3 is the high-performance version of the BMW 3 Series (like the 325i). BMWs tend to have higher insurance premiums than some of the higher-ranked options on our list – including the domestic speedsters at the top of our list. However, the BMW M3 remains one of the cheapest fast cars to insure in the United States. The BMW M3 accelerates from 0 to 60mph in under 5 seconds, yet drivers pay around $2,000 per year for car insurance, on average.

Many drivers are surprised to discover how affordable car insurance can be on the Nissan 370Z. It’s true: the average driver in the United States pays around $1,900 per year to insure a Nissan 370Z. If you have an older model, then you could pay even lower rates.

Most fast cars on this list are two-doors. The Subaru WRX STI is one of the few available as a four-door. Typically, having more doors increases the cost of car insurance because doors are costly to repair. However, the Subaru WRX STI has lower insurance premiums than many of its speedy competitors above. The average WRX STI driver in the United States pays around $1,700 per year for car insurance. It’s not the fastest or cheapest car on this list, although it remains one of the best combinations of speed and insurance affordability on this list.

Compare Quotes Today to Save Even More

The premiums listed above are the average car insurance premiums for drivers across the United States. In many cases, drivers can pay even lower premiums on car insurance while driving faster cars.

The average price of car insurance on a Ford Mustang GT, for example, is around $1,700 per year. By comparing quotes and living in the right ZIP code, you could pay as little as $1,200 per year on car insurance.

The age of the car also matters. Older cars are less valuable, which means lower payouts for insurers. If you drive an older Ford Mustang GT – or any other fast car on this list – then you could save even more.

Other Discounts Available on Fast Cars

If you want to drive a fast car and pay cheap insurance premiums, then we recommend taking advantage of other insurance discounts.

Potential insurance discounts for drivers who like fast cars include:

Safe Driver Discounts: If you like fast cars, then you might also be a safe driver. Safe drivers save up to 40%. If you have no speeding tickets or at-fault accidents within the last 3 to 5 years, then you could qualify for a safe driving discount with most insurers.

Bundling Discounts: Bundling multiple insurance policies together can reduce your insurance cost overall. If you get your home insurance and auto insurance from one company, for example, then you could save big on auto insurance.

Convertible vs. Coupe vs. Sedan: In many cases, the convertible version of the sportscar is cheaper to insure than a coupe or sedan. However, it varies between models. In some cases, a sedan is cheaper to insure because doors are more expensive to repair after an accident and the sedan has four doors. With other vehicles, the coupe is the most expensive to insure because coupe drivers are statistically more likely to engage in risky behavior. Compare insurance premiums between models to ensure you’re paying the cheapest rates.

Is insurance higher for fast cars?

Does a turbo engine increase insurance?

Most insurance companies charge higher premiums for a turbo engine because it adds power and speed to a vehicle, increasing the risk of insuring the vehicle. Some insurers may also refuse to insure vehicles with turbo engines. However, you may not pay higher insurance premiums if your VIN does not identify the vehicle as having a turbo engine.

Does a V8 cost more on insurance?

What is considered a sports car for insurance purposes?

What are some fast cars with cheap insurance for young drivers?

The fastest cars with cheap insurance for young drivers include the Ford Mustang GT, Chevrolet Camaro, Chevrolet Corvette, and Dodge Challenger, among other options.