Which ZIP Codes Have the Cheapest Auto Insurance Rates?

You may have heard that your ZIP code impacts auto insurance rates. It’s true: insurers consider your ZIP code when pricing premiums.

Some ZIP codes are more expensive for auto insurance, while others are cheaper. Insurers have decided certain ZIP codes are associated with a higher risk of making a claim, so they charge higher rates to drivers living in those ZIP codes. 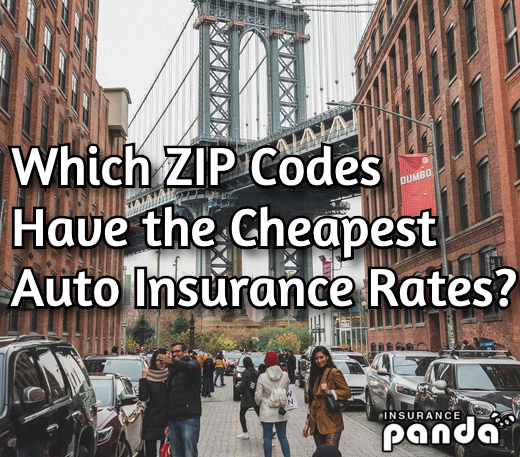 ZIP code plays a significant role in risk. Based on your ZIP code, you might pay hundreds of dollars more per year for car insurance.

Here are some of the ways in which ZIP code can play a role in car insurance:

High Accident Rate: Some ZIP codes simply have higher accident rates than others. Maybe you drive through a notoriously dangerous intersection every day. Maybe your section of the freeway has a higher-than-average number of accidents.

Flood Risk: Do you live in a flood-prone area? Certain areas are more prone to flooding than others. If a flood damages your garage with your car inside, your insurer may have to pay.

Natural Disasters: Do you live in an area at risk of forest fires? Do you live near an earthquake or tsunami zone? What about hurricanes or tornadoes? Natural disasters cost insurers billions when they strike. You’ll pay higher rates if there’s a higher risk of natural disasters in your ZIP code.

Crime: Some ZIP codes have significantly higher crime than others. If you frequently park your car in a ZIP code with thousands of car thefts per year, then you’re going to pay more for car insurance. Some ZIP codes are also associated with higher rates of vandalism, break-ins, and other crimes, all of which increase the likelihood of making a claim – and boost car insurance premiums.

The Most Expensive ZIP Codes for Car Insurance in Each State

If you look at a list of the cheapest and most expensive ZIP codes for car insurance in each state, you’ll notice a pattern.

In most states, the most expensive ZIP codes for car insurance are ZIP codes near the center of big cities. These ZIP codes are crowded with people. They have a higher traffic volume. Many have higher rates of crime.

Other ZIP codes are located in big cities – but outside of the downtown area. These expensive ZIP codes may have higher rates of break-ins or vandalism. Drivers in certain ZIP codes around Detroit, for example, pay some of the costliest car insurance premiums in America, on average, due to high vehicle crime.

Some of the notable ZIP codes identified in the report include:

The Cheapest ZIP Codes for Car Insurance in Each State

Other ZIP codes have the opposite effect. Some ZIP codes are associated with cheaper car insurance premiums.

Typically, these ZIP codes are quiet, rural towns. They have low population density. They don’t have a rush hour. Some don’t have much traffic at all. They also tend to be safe. With low rates of break-ins and thefts, insurers rarely have to pay total loss claims to policyholders.

The same CarInsurance.com study linked above identified some of the cheapest ZIP codes in the United States, including:

You shouldn’t move to a ZIP code specifically for lower car insurance premiums. However, it’s something to consider when finding a place to live – especially if you’re moving from a rural area to a big city. Many drivers are shocked to see insurance prices nearly double after the move – simply because they changed their ZIP code.

Remember: no matter where you live, you can compare car insurance prices online just by entering your ZIP code, helping you pay the cheapest possible rates for car insurance wherever you live.