Is It Cheaper to Insure a Chevy Camaro or a Ford Mustang?

When it comes to muscle cars, two vehicles stand out on the top of the pack: the Chevy Camaro and the Ford Mustang. 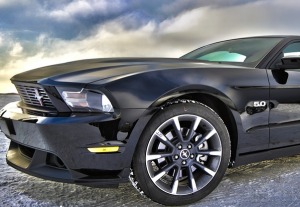 Both are American-made, are outfitted with powerful engines, have a sleek design, and offer incredible performance. Of course, you probably have your preference regarding which one suits your taste and style. But if you’re thinking about purchasing one of these vehicles, the cost is a factor that is probably a big concern; and that’s understandable. While the sticker prices on each car vary depending on the model and any extras that it might be equipped with, on average, you can expect to spend between $23,000 and upwards of $50,000 for one of these vehicles.

Factors that Affect Insurance Premiums for Both Vehicles

Before discussing which vehicle costs less to insure, it’s important to understand the factors that drive the cost of insurance up for some cars, besides your driving record and credit score. Insurance carriers are also concerned about the vehicle, of course. They factor into consideration the safety ratings of the vehicle (the higher the ratings, the lower the risk of an accident), how much it will cost to repair the car in the event that an accident does occur, the chances of theft, and how susceptible it is to damage.

The National Highway Transportation Safety Administration (NHTSA) performs rigorous safety tests on all vehicles. In the tests that were conducted on the 2012 Chevy Camaro two-door coupe, 5-star ratings were awarded in the rollover, front and side-impact tests performed by the NHTSA. While the 2012 Ford Mustang two-door coupe received a 5-star rollover rating by the NHTSA, it only received 4 stars for front and side-impact tests. One concern is the protection that the vehicle provides for people who are riding in the back of the car.

In terms of security features, the Chevy Camaro also stands above the Ford Mustang. While both vehicles offer several standard safety features, including remote-controlled locks, panic alarms, and systems that are designed to deter theft, the Camaro’s anti-theft system was more advanced than the Mustang’s.

Types of Insurance Coverage You’ll Need for Mustangs and Camaros

The type of auto insurance you carry will also affect the price of coverage.

Whether you drive a Chevy Camaro or a Ford Mustang, you will legally be required to carry auto liability insurance. This type of insurance offers coverage for third-party injuries and property damages. For example, if you are involved in an accident and you are at fault, any injuries that the other motorist sustains and any damages that the other party’s vehicle sustains will be covered by your liability policy.

Of course, the minimum amount of liability coverage you are required to carry in your state will affect the rates. Additionally, if you choose to carry more than the minimum requirement, then your rates will be higher.

If you are driving a Chevy Camaro or a Ford Mustang, it is strongly recommended that you carry more than just liability coverage. You should also consider adding on the following coverage types:

Of course, the more policies you carry, the more you can expect to pay for your insurance, regardless of whether you are driving a Chevy Camaro or a Ford Mustang.

So, Which is Cheaper to Insure, the Camaro or the Mustang?

Which is cheaper to insure: the Chevy Camaro or the Ford Mustang? Well, it depends on who you ask, but they appear to cost around the same amount.

According to Value Penguin’s 2018 study, however, things have switched the other way. Now, the Camaro costs $1,933 annually to insure, while the Mustang costs $1,892 to insure. So, while the Camaro currently sees higher insurance premiums, the difference is only a couple of dollars per month.

These numbers, of course, are only estimates. The true cost of insurance will be determined by the factors described above. To get a more accurate estimate of the premium costs for either a Camaro or a Mustang, please contact your insurance agent. They will be able to give you accurate Mustang insurance quotes and Camaro insurance quotes that are tailored to your specific needs.