Can I Drive My Parents’ Car if I’m Not on Their Insurance?

Your parents are out of town and you’re out of soda. You decide to take their car and go to the nearby gas station, only to T-Bone a car that you didn’t see pulling out of the parking lot. Fortunately, nobody is hurt. But are you covered by your parents’ auto insurance?

The simple answer is yes, you would be covered. However, it’s not so clear-cut, and there actually is a chance that the claim would be denied.

Most of the time, the primary auto policy that kicks in after an accident is the policy that’s on the vehicle. In other words, auto insurance follows the vehicle first.

Who Can Drive Under Your Insurance?

Anybody can drive your car and be insured as long as you give them permission. An easy example of this is two neighbors, Jim and Sharon, both of whom have auto insurance. If Jim borrows Sharon’s car over the weekend and gets into an accident, the claim would be filed under Sharon’s auto policy, not Jim’s. Auto insurance follows the car first. 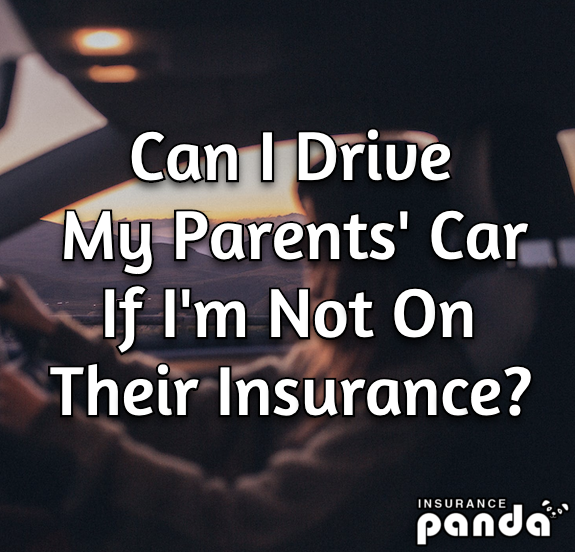 Actually, anyone in the country (of legal driving age and properly licensed) can be covered under your auto policy as long as you give them permission to drive your car.

So Are Children Insured When They Drive Their Parents’ Cars?

It’s not so clear-cut, however, when it comes to driving-age kids living with their parents. The key difference between a kid driving their parents’ car and the neighbor example given above is that the kid will be living with his or her parents. They share the same residency, while the neighbors clearly don’t live together. Jim borrowing Sharon’s car was a one-off event, rather than a regular possibility.

An example of why this situation can be a problem is when two people are living together, a boyfriend and girlfriend. Let’s say the girlfriend owns the house and has her own auto policy, with her car. Her boyfriend moves in with her, but he has had a few speeding tickets and a DUI in the last 2 years.

If he takes her car to the store and gets into a wreck, is there coverage? Yes, the insurance company will pay the claim, but they will likely non-renew the girlfriend’s policy, even if she has a perfect driving record.

The reason is that someone who lived with her was not listed as a driver on her policy, meaning the insurance company didn’t know the full extent of the risk involved. If they had known about the boyfriend, they could have either charged an extra premium to cover the more likely scenario that he would be involved with a claim, or even excluded him from the policy.

The same principle applies to kids driving cars on their parents’ policy but not being listed as a driver.

Dangers of Not Being Listed on Your Parents’ Policy

1) The Child Will Automatically Be Added to the Policy

The best possible outcome that can happen after an unlisted teenage driver gets into an accident using their parents’ car is that the insurance company will pay the claim, and then simply add the kid to the policy as a driver. The policy will stay active and coverage will continue.

The insurance premiums will go up because now the policy has a teenage driver with an accident on his/her record, but the same company will continue to insure the family.

2) The Parents Could Face Non-Renewal

A more likely outcome is that the insurance company will pay the claim and then non-renew the policy. This means that they will continue to insure the family, but only until the end of the policy period. So whenever the policy expires, the company won’t offer a renewal policy, and the family will need to acquire auto insurance with another company.

The reason that they are doing this is that the insurance company doesn’t want to insure a family that doesn’t provide accurate information. And now the family is considered to be a higher risk to insurers since they have a teenage driver who got in an accident.

Basically, the company is taking this opportunity to get off the risk, and they have a right to do that because the family provided inaccurate information about the policy.

3) The Claim Could Be Denied

The company could deny the claim. Earlier in the article, we stated that anyone who legally drives a covered vehicle is covered under the insurance policy. However, insurance policies have more than one page of content and legal requirements.

One of these policy requirements is being honest with the insurance company about the nature of the risk. In other words, people need to fully disclose any relevant information that pertains to the policy. And withholding information just to get a lower premium is a violation of the insurance contract and can void coverage.

So, the company could try to deny the claim, knowing that they have some legal rights to do so. If the customer decides to fight this denial in court, the company might lose and have to pay the claim. However, this is a lengthy and costly process with no guaranteed outcome.

Final Word on Children Being Covered Under Their Parents’ Policies

Facing a claim denial or a policy non-renewal because your teen driver got into an accident and wasn’t listed on your policy can lead to a huge dent in your piggy bank. To ensure coverage for your children, the best thing to do is to make sure all licensed people who live in your house are listed as a driver on your policy. This will increase your auto premiums, especially if teenage drivers are involved, but it’s the legal thing to do and will guarantee coverage.

Andrew Flueckiger Andrew Flueckiger is an experienced insurance agent with experience in sales, management, leadership, and marketing. A graduate of Indiana University, Andrew is a licensed insurance agent specializing in personal and commercial insurance. Andrew not only holds a wealth of insurance industry knowledge and expertise, in 2016, he also obtained the Certified Insurance Counselor designation.
Back to Top