Can a Car Have Two Separate Insurance Policies by Two Different People?

If you share a car with others, you may be wondering if you can have two insurance policies on it by two different people. Maybe you share a car with a partner, sibling, or roommate and you each want coverage for the car when you drive it. This might happen if you live in an area that has extensive public transit options, and you both only use the car sparingly. It could also happen if each party has its own primary car, but shares a secondary car. Here’s what you need to know about putting two insurance policies on the same car.

It is legal but is discouraged. 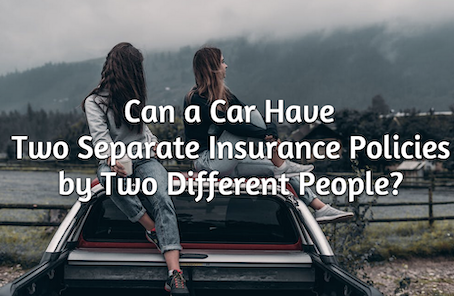 There’s no law that says you can’t take out multiple insurance policies on the same car. However, most insurance companies will do everything they can to discourage you from doing this. This is because having the same car insured by multiple companies can create quite a bit of confusion if you do need to file a claim. In some cases, making two insurance claims on the same car could be considered insurance fraud. If you are interested in purchasing two insurance policies for your car, you should read through the fine print of the policy to make sure it is legal.

Not everyone can insure a car.

In order to take out an insurance policy on a car, you must have some sort of relation to the car, and stand to lose something if it were damaged. For example, if you regularly use your partner’s car as a source of transportation, you would lose that if the car were damaged – that’s what’s called ‘insurable interest’. Another type of insurable interest is if someone else has co-signed a car lease, as they could face consequences with the original lender if the car were damaged. However, your roommate who doesn’t use your car couldn’t just take out an insurance policy on it, because that doesn’t qualify as insurable interest.

If you are sharing a car with other people, the best option is to have multiple drivers listed on the same policy. There are several reasons why this is a better option than having two separate policies. The first is that you won’t encounter conflicts with your insurance company. Insurance companies encourage you to put all drivers of any vehicle on an insurance policy, and they’ll be happy to work with you to make sure every driver is covered in the event of an accident. If you have two insurance policies, you run the risk of getting dropped by your insurer if they find out. This violates the terms of most insurance agreements, and could even make it difficult for you to get insurance at fair rates in the future. Having two policies on the same car could also make it incredibly difficult to get the coverage you need if your car is damaged. Once the insurance company finds out that there’s another policy on your car, they might refuse to pay, which could put you in a very difficult situation.

Another reason why you should use just one policy for your car is that it will be cheaper in the long run. Even if adding multiple drivers to your insurance policy raises your monthly rates, it’s still more affordable in total than having two separate insurance policies. Consider working out a compromise with the other party so you can split the monthly payments. You’ll save money and you’ll both be covered in the event of an accident.

How to Find The Best Policy For Multiple Drivers

One reason that people consider using multiple insurance policies is that they think they can get a lower rate if they take out their own policy than if they share a policy with someone who the insurance company might consider to be a risk. There are many reasons why insurance companies will raise your rates – a history of accidents, filing too many claims, or simply being a new driver. However, there are things you can do to help lower your rates. For example, both drivers on the policy can take a driving safety class approved by the insurance company, which often gets you a discount. You can also raise your deductible, which will lower your monthly payments.

It’s worth asking your insurance agent if there are any other discounts you qualify for – you might be surprised by what they offer. You also might benefit from shopping around for different policies, as rates can vary wildly between insurers. If you really don’t want to share a policy with someone else, consider just investing in your own car or looking for alternate means of transportation. This way, you can be solely responsible for your own insurance.