Can Car Insurance Deny a Claim If the Address on the Policy Is False?

If you fail to report your current address to your auto insurer, there is a chance a claim you make for damages to your vehicle will be denied.  Though it is not guaranteed the insurer will deny your claim, there is a possibility you will have to foot the entirety of the repair bill on your own.  The specific action taken by your auto insurer hinges on that insurer’s unique policies and the context. Let’s take a closer look at this surprisingly common issue.

Why Your Address Matters in the Context of Auto Insurance 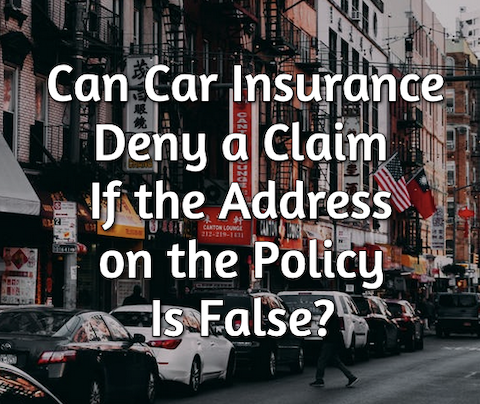 Auto insurance providers mandate customers to update their addresses as soon as they move.  Insurers require an immediate update in order to ensure the driver is paying the appropriate insurance rate for the zip code of his or her house or apartment.  It typically costs much more to insure an automobile in a busy, crime-ridden inner city than it does to insure an automobile in a comparably safe suburb. This is precisely why some auto insurers will go as far as denying the customer’s claim for damages after an accident simply because he or she failed to update the new address with the insurer.

Take a moment to consider such a situation from the auto insurer’s perspective.  The insurer cannot make money charging the same rate to all customers as many customers live in areas with comparably high levels of traffic, accidents, auto theft, etc.  If it turns out a customer had been paying significantly less for auto insurance at his or her old address in a comparably less busy part of town, why should the company have to pay for damages resulting from a claim?  However, if the customer’s new address is located in an area with low auto insurance rates, the insurer will likely approve the claim for damages. In fact, the insurer might even issue a refund to the driver to account for over-payment based on the new address.

Claims for an Accident When Not At Fault

If you fail to update your address with the insurance provider and you are in an accident at which you are not at fault, there is a good chance your coverages will not be affected.  After all, you did not cause the accident so you should not have to pay. However, the insurance company is likely to increase your auto insurance rate after the new address is reported assuming the new address is in an area with an elevated level of accidents, crime and other risks to your vehicle.  Yet there is a good chance the insurance provider will approve your claim simply because you are the victim in this situation; you were struck by a driver who operated his or her vehicle in a negligent manner.

Claims for an Accident When You are At Fault

If you are at fault for the accident, tell the truth about your new address when contacting your insurer.  However, there might be a contractual obligation within your policy that empowers the insurer to decrease or even deny payment.  This is especially likely after an accident in which you are at fault. The insurer might transmit a ROR letter, meaning reservation of rights.  This letter is likely to state the insurer is considering the fact that you likely violated segments of the policy and they have the right to deny, decrease, or disclaim coverage.

In other words, it is possible for the auto insurance provider to deny your claim for damages simply because you were not completely forthright about your address.  However, if you have a solid track record in terms of making payments and telling the truth to the insurer, that group will likely pay the claim and issue a letter of concerns.  This type of letter indicates the insurance provider will honor your claim yet if there are any controversies moving forward, the insurer is likely to put up a fight.

Why Nothing is Likely to Happen

As long as your automobile’s VIN number, make and model match and you pay your auto insurance premiums with regularity, there is a good chance the insurer will cover your claim.  The bottom line is people change addresses at a high frequency these days. It is actually quite common for people to forget to update their new address with the auto insurance provider and other services providers.  Therefore, there is a good chance the auto insurer will likely approve the claim and pay the damages in accordance with the policy after an accident. However, if it can be proven you intentionally used an address different from that at which you park your vehicle to save money, it is likely your auto insurance policy will be voided, your claim denied and you might even be subjected to insurance fraud charges.

The Importance of “Territory”

Territory or location matters a great deal in the context of auto insurance. The position where the automobile is garaged and the area where the vehicle is operated is known as its territory.  Each territory has its own unique risk level. There is no way for the insurance provider to determine if you have moved to a territory with an elevated risk.  This onus is on you, the consumer, as you are the one making the move to a new location. The insurance company might deny your claim due to the elevated risk of your new territory as it would be impossible to stay in business if everyone who moved to an area with an elevated risk refused to report their new address. The moral of the story is to report your change of address to your auto insurer right away, even if it is to a new house or apartment in the same zip code.