Is Auto Insurance Cheaper for Drivers in Their 40s?

Auto insurance is typically cheaper for middle-aged adults, those with clean driving records, and those who marry.  However, plenty of people question if auto insurance is cheaper in one’s 40s as opposed to the 30s, 50s, 60s, and other ages.  After all, it seems to make sense for an individual who has driven for a couple of decades to pay less than inexperienced drivers and senior citizens inclined to make mistakes.  Let’s explore this often-debated issue to finally get to the truth of the matter.

The 40s are the Golden Age for Car Insurance 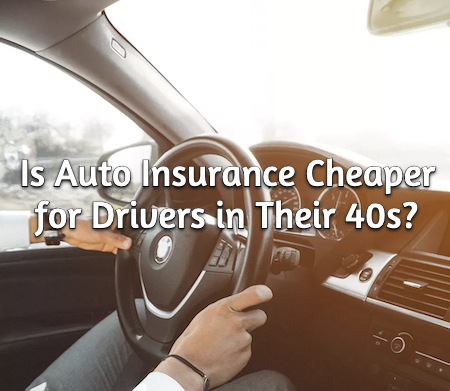 If you are a safe driver with a fairly clean driving record, you really will pay less for auto insurance in your 40s. Part of the reason why auto insurers are inclined to reduce their rates for drivers in their 40s is the fact that this is the mid-point of life at which most people reach full maturity.  The plain truth is those who have a couple of decades of on-road experience under their belt are less likely to make mistakes than those new to driving as well as the elderly.

Drivers in their 40s tend to make fewer mistakes than those in most other age cohorts as their reflexes are still sharp.  Drivers in their 40s are also a safe bet for auto insurance companies as they have faced an array of driving challenges throughout the prior two decades.  Furthermore, those in their 40s are more likely to have settled down with a significant other and established a family than younger drivers. Such family responsibilities encourage the individual in question to drive that much safer.  Therefore, these drivers tend to have lower monthly auto insurance premiums. The bottom line is auto insurance has been and always will be a numbers game rife with in-depth risk analysis based on statistics and prior behavior.

A number of other factors also play a role in the price you pay for auto insurance even if you are a middle-aged adult.  Young men tend to pay more for auto insurance than women as men drive at a higher frequency, are more likely to take risks on the road, and favor costlier vehicles.  However, some men in their 40s and 50s pay less than women after demonstrating their ability to drive safely. The make and model of the vehicle largely determines the auto insurance rate simply because costlier cars are more expensive to insure.

Most drivers in their 40s are in their prime earning years so they are likely to drive a fairly expensive vehicle that carries a higher insurance rate.  Furthermore, drivers in their 40s are inclined to purchase or lease a new vehicle every couple of years. The newer the vehicle, the more expensive it is to insure as it is worth that much more money than a used vehicle.  The mileage you drive also plays a part in the auto insurance rate you pay. If you are in the age range of 40-50 yet have a 45-minute commute to and from work every single day, you will likely pay a higher auto insurance premium than another driver in your age range simply because of your long commute.  The moral of this story is those in their 40s are likely to pay less in auto insurance yet a variety of factors have the potential to spike the monthly premium regardless of the driver’s age.

Auto Insurance in Your 40s: A Look at the Numbers

According to CarInsurance.com, auto insurance rates typically decrease to around $1,700 per year once a driver reaches age 25.  Car insurance subsequently declines as the driver ages. CarInsurance.com reports yearly premiums for those between the ages of 46 and 55 pay about $2,400 per year on average.  This figure is somewhat skewed as those living in heavily-populated urban areas typically pay considerably more than those in the comparably safe rural and suburban areas. As noted above, auto insurance swings right back up once the driver reaches senior citizen status due to the fact that reflexes, vision, and hearing tend to deteriorate around the age of retirement.  However, drivers between the ages of 40 and 50 will save a bundle of money on their auto insurance so the subsequent increase in the golden years should not sting as much.