Some auto accidents are serious to the point that the damage inflicted on the vehicle is higher than the insurance coverage’s limit. If this happens to you, you might feel hopeless. However, this is not the end of the world. There might be several other options available to cover the cost of the damages beyond what the insurance provider will pay.

The Other Driver’s Umbrella Liability

Some drivers carry an umbrella liability policy in addition to their regular auto insurance. If such an umbrella policy is in place, it can be used to cover the cost of property damage above the coverage provided through the driver’s liability coverage.  However, the driver’s auto insurer probably won’t make such information readily available. It might be necessary to contact the other driver’s insurance company and ask some questions.

Personal injury protection, or PIP for short, is also worth looking into if the property damage caused by the accident exceeds your auto insurance limit. PIP coverage can help cover the cost of damages stemming from the accident. PIP can even kick in to account for lost wages and medical bills. It might even be possible to use the PIP coverage of another person in your household if you do not have PIP coverage of your own.

Underinsured motorist protection, also referred to as UIM, is not mandatory under every state’s law.  However, UIM coverage is quite helpful in that it can cover accident-related expenses the other driver’s auto insurance does not cover.  If the damages are more than the negligent driver’s liability coverage, UIM will kick in. However, plenty of drivers do not carry UIM coverage.  If you are unsure if you have UIM coverage or if your UIM coverage level is not high enough, it will be of no benefit to you.

A Claim Against the Negligent Driver’s Employer 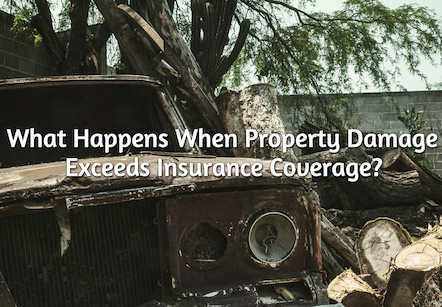 It is also possible to make a claim against the negligent driver’s employer.  However, this route will only have the potential for success if the at-fault driver was working at the time of the accident.  It does not matter if the driver was using a company car or his or her own vehicle at the time of the crash; what matters is whether he or she was on the job at the time of the accident.  If the negligent driver was working when he or she hit your vehicle, it might be possible to hold that driver’s employer liable for some or even the entirety of the resulting damages.  Such a lawsuit has grounds based on the legal concept of vicarious liability. Though the employer will undoubtedly defend against the claim, it is possible to obtain compensation for the true cost of the accident with the assistance of a talented attorney.

What About a Third-party?

There might be multiple people at fault for the accident.  If another person or institution is even partially to blame for the collision, it might be possible to recover compensation from that entity or person.  Even a government entity can be sued after an accident. As an example, if the government entity in question failed to take proper care of the road or if one of the vehicle manufacturers is responsible for a defective part, there are legal grounds for a successful lawsuit.

If none of the options described above apply to your case, it might be possible to obtain coverage through your health insurance.  Be sure to take a close look at your health insurance policy to see if it includes or excludes auto accident injuries. The health insurance provider might mandate that you pay back the costs it covered from the collision at a later point in time.  Make sure you are fully aware of the details of your policy before taking action.

Filing a Lawsuit Against the Negligent Driver

There is no reason to give up if you do not have PIP or UIM coverage as described above.  It might be possible to obtain the compensation you need and deserve after this unfortunate incident by filing a lawsuit against the negligent driver.  This lawsuit has the potential to lead to a favorable judgment that forces the negligent driver to pay for your related expenses out-of-pocket. However, there is no guarantee the driver will have the financial resources available to cover such costs.

Ask for Assistance From an Attorney

When in doubt, lean on your attorney for guidance.  A legal practitioner will help you understand all of your options and make the best decision.  However, plenty of people are hesitant to pay for legal assistance considering the cost of their medical bills and lost income.  Though legal services will cost money, they are well worth it. After all, you likely have thousands if not tens of thousands of dollars or more hanging in the balance.  Pay the little bit of money necessary for an attorney and you might end up with a settlement, verdict, or another award that covers the entirety of your costs related to the accident.