Texas and California are the two most populous states in America. They’re also two of the most expensive states for car insurance. 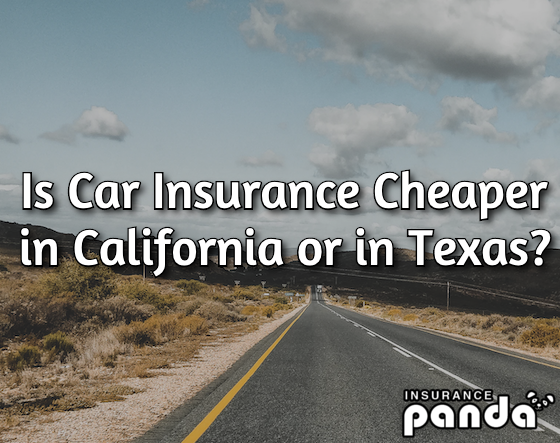 Typically, Texas has slightly cheaper car insurance than California. However, as with all car insurance comparisons, prices depend heavily on your driving history, demographic data, location, and other factors.

Statewide, drivers in Texas tend to pay slightly cheaper rates for car insurance than drivers in California – although the difference is small and quickly narrowing.

Car insurance premiums vary widely throughout the United States. Each state has its own unique insurance laws.

Other states have high insurance requirements or no-fault insurance systems, which tend to be associated with higher insurance costs.

Even within a state, there can be considerable fluctuations in car insurance prices. Drivers in urban areas, for example, almost always pay higher rates than drivers in rural areas. This is doubly true if the urban area has higher traffic, accident rates, crime rates, and other factors that drive prices higher.

Both of these prices are well above average compared to the rest of the United States. Nationwide, the average driver pays roughly $1,350 per year for full coverage car insurance (which includes liability coverage, comprehensive coverage, and collision coverage).

Both California and Texas are among the top 5 most expensive states in America for car insurance, trailing only Michigan, Louisiana, and Florida for the top positions.

Drivers in Texas might pay slightly less for car insurance than drivers in California today – but this advantage is quickly disappearing.

In fact, in the most recent rankings on some websites, Texas drivers paid slightly more, on average, than California drivers.

These numbers make Texas the fourth most expensive state for car insurance, pushing California to the fifth position.

California has always been a more expensive state for overall living costs, which is why many drivers expect to pay more for car insurance. Living costs are slightly cheaper in Texas, although car insurance premiums are rising more rapidly.

To determine the difference between Texas and California car insurance premiums, it helps to consider the minimum requirements for each state.

Texas has much higher minimum liability insurance requirements than California. In fact, Texas requires 2x to 5x the car insurance limits as California, which increases Texas car insurance costs even with an overall lower cost of living.

The California Department of Motor Vehicles (DMV) requires drivers to provide proof of insurance or a surety bond upon request. Minimum insurance limits include:

The Texas Department of Insurance (TDI) requires drivers to have the following minimum insurance limits:

Drivers in Texas tend to pay slightly cheaper insurance premiums than drivers in California. However, rates vary widely across each state. It’s possible a driver in rural California will pay less than half the premiums of a driver in downtown Dallas.

California and Texas are also two of the largest states in America geographically, with Texas ranked second overall (behind only Alaska) and California ranking third overall.

Because of the high population, geographic diversity, and large size of California and Texas, insurance premiums vary widely across each state.

A driver in Redding, California has much different insurance needs than a driver in San Diego.

Similarly, a driver in Corpus Christi, Texas has much different insurance needs than a driver in Amarillo.

Are you a safe driver? Do you have zero accidents or citations in the last 10 years? If so, you should pay less for car insurance in California than in Texas.

If you have one or more accidents on your driving history, then you could pay 70% more for car insurance in California than a driver with a clean record.

If you have one or more accidents on your driving history, then you’ll pay 40% to 60% higher insurance premiums in Texas. That’s still a large bump – but it’s a smaller increase than you would pay in California.

The reason for this difference is related to the information insurers are allowed to use. Insurance companies in California are not allowed to use credit score and other information to calculate risk because of state insurance laws, which means they weigh driver history more heavily than other factors.

One of the biggest differences between Texas and California insurance laws is the treatment of credit scores.

California is one of three states (along with Hawaii and Massachusetts) that bans insurance companies from using credit scores to calculate premiums.

Despite the apparent correlation between credit score and risk, insurance companies in California cannot use credit scores when calculating premiums.

Other Factors that Influence Car Insurance in Texas and California

Natural Disasters: Houston and nearby areas have a higher risk of hurricanes and major flooding. Parts of California have higher risks of earthquakes and forest fires. Based on the risk of natural disasters in your area, insurance companies in Texas and California will adjust rates.

Driver History: Driver history plays a role in both states. A driver with speeding tickets and multiple at-fault accidents will pay more for car insurance than a driver with a clean record.

Final Word – Is Car Insurance Cheaper in Texas or California?

Insurance is all about risk. Based on all of the factors above, insurance companies in California and Texas will analyze risk, then charge premiums based on your perceived likelihood of making a claim.