Is Arizona Expensive for Car Insurance?

Next time you get your car insurance bill, either in the mail or electronically, it’s easy to think that you are paying some of the highest car insurance rates of anyone you know.

While that might actually be true, there are many people in Arizona and the rest of the country that are paying higher rates than you.

So, just how does Arizona stack up against the rest of the country?

The numbers show that the average auto insurance annual premium for the whole state of Arizona is $1,449 per year. This average puts Arizona squarely in the middle of the pack at #22 for the most expensive states for car insurance. 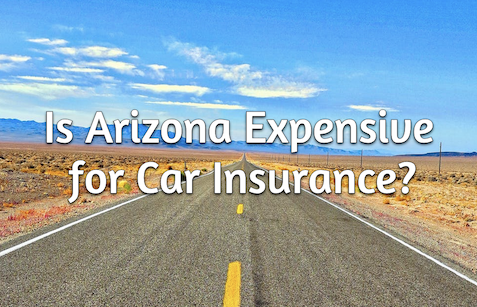 Arizona is trending upwards in the cost of car insurance. In recent years it was even more affordable than it is now, but Arizona has also seen a large increase in population during that same time.

This means that on average, auto insurance is not all that expensive compared with the rest of the country. In fact, the entire United States’ average auto premium is $1,457, so Arizona as a state has the same average premiums as the entire country put together.

However, within the state of Arizona, there is a very large range of premiums. For example, Phoenix has by far the most expensive car insurance rates in the state. The most expensive ZIP codes are 85017, 85009, 85019, and 85031. All four of those areas have average annual premiums of over $1,900 per year.

However, if you live in western Arizona, your average is more in the $1,000/year range.

How Are Insurance Rates Determined in Arizona?

Car insurance companies set their base rates on zip codes. The two main factors that they look at in setting their rates are claims history and population density.

This makes sense on a logical level because accidents are much more likely to occur in places with a lot of cars operating in a crowded area. This is why cities have higher insurance rates than rural areas and small towns.

Claims activity includes things such as accidents and thefts. If a certain ZIP Code has a much higher accident rate than in the neighboring ZIP Code, then the insurance company will adjust their rates accordingly and have higher rates in the ZIP code with more accidents.

The same is true with the population. Cities, counties, and ZIP codes with larger populations will have higher rates, even if their claim activity is relatively low. The insurance company will still set higher rates because they will expect more accidents.

Of course, your individual rating factors will always still apply. This includes things such as your age, gender, driving history, type of vehicles, credit score, and discounts. These things impact your rates more than the base rate, but all these factors go into determining your overall premium.

If you have moved recently, you’ve likely noticed a change in your auto premium. If it was a dramatic move, such as from New York City to Tucson, you likely had a big change in premium.

But even if your move was from Flagstaff to Phoenix, or from one part of Phoenix to another, you still likely experienced a change in premium. This is all down to the role of location and the base rate for your ZIP code.

Why Is Auto Insurance so Expensive in Arizona?

No matter where you are located in Arizona, or anywhere else in the country, for many people their auto insurance bill is one of the most expensive bills they have. Why is it so much?

We mentioned earlier that insurance companies set their rates based on ZIP codes. This is true, but they don’t operate just in that narrow window either. Insurance companies look at the entire state for each state that they operate in, to see how profitable it is and to set rates.

They can also be affected nationally if a natural disaster strikes or they have a particularly bad year in some states. This can affect how they set their rates in other states.

Insurance companies are for-profit businesses, meaning their goal is to make money. However, insurance is also heavily regulated. This means that they have strong oversight from each states’ department of insurance.

Similar to the banking industry, insurance companies can’t just set whatever rates they want, they have to follow many guidelines and get approval from the state’s government.

With all of that in mind, most insurance companies in many states are actually losing money each year, or at best just breaking even.

They are paying out more money in claims than they are bringing in with premiums. The reason for this is basically two things: more expensive cars to fix, and more distracted driving.

Cars are much nicer and more technologically advanced today than they used to be, which makes them more expensive to repair or replace. Even minor fender benders can end up costing thousands of dollars if the car has damaged sensors or video cameras.

People are also getting into more accidents than they used to. Part of this is down to more people living in congested cities, but a large part of it is also due to distracted driving.

Arizona’s car insurance premiums have been rising in the last few years, mainly due to people moving into the state. There are pockets of Phoenix where the cost of car insurance is very expensive.

However, statewide, car insurance in Arizona is still affordable compared with the rest of the country.