Can You Pay for Auto Insurance with Bitcoin?

Millions of people hold bitcoin. If you’re a bitcoin holder, then you may want to pay for your auto insurance premiums with bitcoin. 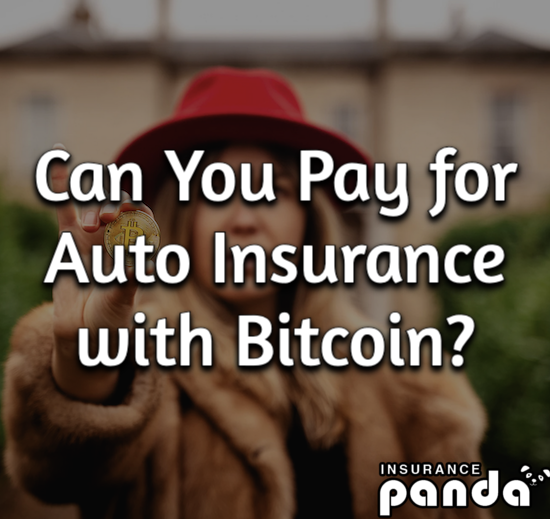 Today, we’re explaining everything you need to know about using bitcoin and other digital currencies to pay for auto insurance premiums.

Most major insurers accept multiple payment options. You can pay for car insurance via credit card, debit card, or bank transfer, among other methods.

Major insurance companies do not want to accept bitcoin payments. Bitcoin’s value fluctuates wildly, making it risky for insurers to accept. If the price of bitcoin plummets in the coming months, then your insurer may not have enough money to cover claims.

Yes, insurance companies could immediately swap BTC payments they receive into US Dollars, making it less risky to accept. However, most corporations run into banking issues. Banks may not want to deal with bitcoin.

Over time, things could change. Banks and insurers could accept bitcoin in the near future. For now, however, bitcoin remains off-limits for most insurance companies in the United States.

No large, mainstream insurance companies accept bitcoin as a method of payment. However, some smaller, boutique agencies have started to accept bitcoin.

Most of these companies announce bitcoin payments for the media attention – not because they see it as a valid form of payment for most customers moving forward.

USAA, meanwhile, does not accept bitcoin for payments. However, USAA allows you to add bitcoin wallets to your accounts screen. If you bank with USAA, then you can add a non-USAA account to your dashboard. USAA now lets you add Coinbase BTC wallets to your dashboard, including Coinbase wallets and Coinbase vaults. These accounts can appear on your USAA dashboard alongside your ordinary checking and savings accounts. However, you cannot technically

Use Bitcoin Debit Cards or Credit Cards to Pay for Premiums

It’s possible to indirectly pay for car insurance using bitcoin. If your insurer accepts debit and credit card payments, then you may be able to pay for premiums using your bitcoin debit or credit card.

Bitcoin debit and credit cards work in different ways. Most cards track your bitcoin balance in US Dollars, allowing you to spend US Dollars in the “real world” wherever businesses accept cards.

Try typing your bitcoin debit or credit card number into your insurer’s online payment form. It’s possible it will work, allowing you to effectively use bitcoin to pay for car insurance premiums – although you’re technically spending US Dollars.

No major insurance company in the United States accepts bitcoin. No insurer has even announced plans to support bitcoin in the near future.

Some of the reasons insurers don’t accept bitcoin include:

Everyone Has a Bank Account, But Not Everybody Has Bitcoin: Most insurers accept premiums via bank transfer. You send money to your insurer every month from your bank, and your insurer covers your vehicle. Most people have a bank account, making this an easy payment option for most policyholders. Most policyholders do not hold bitcoin.

Risk of Hacking: Even the world’s biggest exchanges and platforms have been hacked. Yes, insurers could rely on institutional storage options and air-gapped bitcoin wallets. However, bitcoin is still not quite perfect for security.

Car Insurance Expenses Are in US Dollars: Most mechanics do not accept bitcoin. When an insurer covers your costs, it needs to pay in US Dollars – not bitcoin. If an insurer accepted all premiums in bitcoin, it would still need to cover expenses in US Dollars.

Lack of Security: If insurers accepted bitcoin, it would introduce numerous security issues. Hackers would send phishing attempts to policyholders in an attempt to steal their bitcoin via deceptive online forms. Customers would accidentally send too much or too little bitcoin – or send it to the wrong address.

Why Insurers Could Accept Bitcoin in the Near Future

Bitcoin supporters argue that insurers could easily accept bitcoin in the near future. Some of the advantages of accepting bitcoin include:

As of today, insurers believe the disadvantages of bitcoin outweigh the advantages. However, that could change in the future.

In February 2021, Tesla announced plans to accept bitcoin for car payments. Tesla filed its plan with the SEC, causing bitcoin to skyrocket in value.

Tesla also purchased $1.5 billion in bitcoin, disclosing the purchase in its annual report.

As far as we know, Tesla plans to accept bitcoin in exchange for vehicles. You can buy a Tesla Model 3 using bitcoin, for example, by sending your bitcoin directly to Tesla.

If Tesla accepts bitcoin for cars, it’s possible the company will accept bitcoin for auto insurance payments as well.

Could Tesla be the first major automaker and insurance company to accept bitcoin? It’s possible.

Final Word on Paying for Auto Insurance with Bitcoin

It’s also possible that Tesla and other companies could accept bitcoin for insurance in the near future. No insurer has announced plans to accept bitcoin. If bitcoin continues to become more popular and accepted as a currency, however, it’s possible insurers will accept bitcoin in the coming years.