Can You Get SR-22 Insurance with a Suspended License?

You just got back from court and the judge decreed that you need to obtain an SR-22, which apparently has something to do with insurance….

Can you even get SR-22 insurance if my license is already suspended? If so, what is it exactly and how do you go about getting it?

The answer to the first question is, yes, you can and need to get SR-22 insurance if your license is suspended. But what is it exactly? 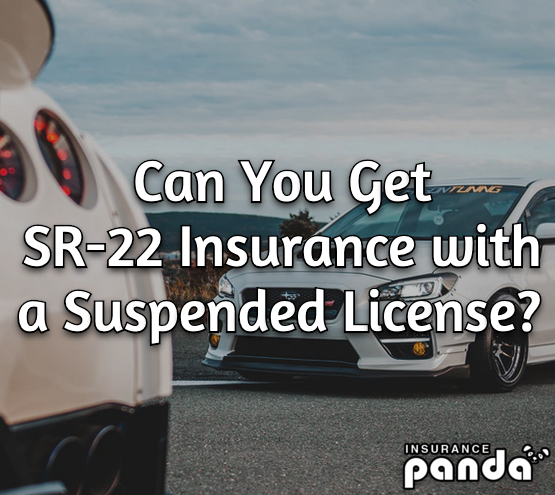 SR-22 insurance isn’t a separate kind of insurance. It is simply an extra form that is filed directly with the state that shows proof that you’ve obtained insurance.

If you think about it, most people never have to “prove” that they have insurance. The state doesn’t ask directly and they don’t have to show the state any supporting documents (unless, of course, they are doing something with the department of motor vehicles).

The only time insurance ever comes up for most people is if they get pulled over by the police, who will promptly ask for “driver’s license, registration, and insurance.”

Just like the police officer asks to see your insurance card if you get pulled over, the state wants to see that you have insurance as well. And the SR-22 is the form that shows them that you do have auto insurance.

Why Does the State Need This SR-22 Certificate?

The most commons reasons that a court will order you to get an SR-22 are things such as:

Basically, the whole reason for the SR-22 is because each state ideally wants everyone to have auto insurance. This goal is a good thing.

Why Do We Need Auto Insurance Again?

Let’s say only 5% or 10% of the driving population carried auto insurance. With the large number of accidents we have today, those drivers would never be able to pay for all the damages they caused.

These damages don’t just include money to fix a fender-bender. Auto claims include things such as:

In some cases, the cost of these types of claims can be in the hundreds of thousands, if not millions, of dollars.

If only 5-10% of the population had insurance, two things would happen:

So, the requirement for everyone to carry auto insurance is both altruistic and self-serving. Whether the two reasons are equal or not in the eyes of the state is beyond the scope of this article, but the end result is the same: requiring people to carry insurance.

The usual time required to have an SR-22 is 3 years. During those 3 years, the state is more closely monitoring your driving and insurance situation.

If you go the 3 years without getting into any at-fault accidents or traffic violations, then you’ll be able to end the SR-22 and go back to purchasing regular insurance, likely resulting in lower premiums.

However, your claims and driving record will still be a factor since many companies look at the last 5 years.

Not every insurance company offers SR-22s, so you will need to ask whether your current one does or not. If it doesn’t, ask your local insurance agent if they have any companies that offer SR-22s, or do some research online.

It’s true that in many cases, people that need SR-22s pay very high auto insurance premiums. This isn’t due to the SR-22 itself, just to the fact that they’ve had things on their driving record that suggests they are a high-risk to insure.

Is there anything you can do if you can’t afford insurance anymore? Yes, there is one thing in particular that you can do to satisfy your SR-22 requirement while saving a little bit of money. Get rid of your vehicle!

It’s possible to get auto insurance without owning or operating a vehicle. The type of policy is called a Named Operator, or Non-Owned auto policy, and is compatible with an SR-22. Think of someone living in NYC who rides the subway every day. They don’t own a car but could still get a Named Operator policy.

These policies include liability limits, just like a standard auto policy, but they offer no coverage for any physical damage. This makes sense because there isn’t a vehicle to insure on this policy.

Going this route might still cost you a lot of money if you also need the SR-22, but it will always be less than getting SR-22 insurance WITH a vehicle.

You will not have any coverage if you try to “game the system” by purchasing this type of policy while owning or regularly operating a vehicle. The company will deny any claim you’re involved in, and there could be a heavy fine and/or jail time.

Final Word – Getting SR-22 Insurance with a Suspended License

If you have major traffic violations on your record, the court might order you to file an SR-22 form and purchase SR-22 insurance. While most SR-22 requirements are due to DUI/DWI convictions, some are due to driving with suspended license convictions. In order to get your license reinstated, your state will require you to file an SR-22 form, which verifies your purchase of adequate insurance coverage.

To answer the question of can you get SR-22 insurance with a suspended license – yes, you can. Most likely, you need to purchase SR-22 insurance in order to reinstate your license!