Are You Always At Fault If You Hit Someone from Behind?

One of the most frequently-repeated facts about car insurance is that you’re never at-fault if someone hits you from behind.

Is this true? Is the other driver immediately at-fault if you get hit from behind? Or are there certain situations where the driver in front is responsible? Today, we’re explaining everything you need to know about whether or not you’re at-fault automatically if you hit someone from behind.

In the vast majority of cases, the rear driver is at-fault when that driver hits someone from behind. 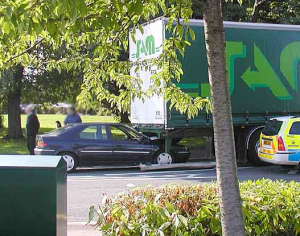 The reason is that it’s your responsibility to leave a safe distance between you and the car in front of you. Even if the driver in front of you slams on his or her brakes and comes to a complete stop for no reason whatsoever, you should have given yourself enough room to stop at whatever speed you were traveling.

What If Someone Pushes your Car?

Plenty of rear-end collisions are chain reactions. The driver behind you gets hit, bumps into you, and then you bump into the car in front of you.

Are you still at-fault in a chain reaction incident like this?

Typically, yes, you are still at least partially-responsible in a situation like this. The reason is simple: in the eyes of the auto insurance industry, you were following too close to the far in front of you. If you had given yourself adequate space, then you wouldn’t have bumped into the car in front of you even after being pushed.

Is the Front Driver Ever At-Fault?

There are certain situations where the front driver – the driver that gets hit from behind – will be found to be at-fault – even if they’re just partially at-fault.

Here are some of the situations where the front driver might be at-fault:

In these situations, the front driver may be at least partially at-fault. Let’s say you were sitting at a red light and the driver in front of you suddenly reversed because a car swerved too closely while cutting across the intersection. Your car hits the front vehicle despite the fact that you didn’t move.

Unfortunately, many of these situations are hard to prove without witnesses or a dashboard camera.

There’s something called the Assured Clear Distance Ahead (ACDA) rule. This rule varies from state-to-state, but it plays a crucial role in many rear-end collision disputes.

Here’s how ACDA is defined in most states:

“[ACDA is] the distance which can be seen to be clear of hazards by the driver, within which they should be able to bring the device to a halt (to stop the car); drivers generally may not pose an “immediate hazard” upon where or when they cannot assure such distance ahead is clear.”

Other states get more specific. Here’s how Oklahoma defines it:

“Any person driving a vehicle on a highway shall drive the same at a careful and prudent speed not greater than nor less than is reasonable and proper, having due regard to the traffic, surface and width of the highway and any other conditions then existing, and no person shall drive any vehicle upon a highway at a speed greater than will permit the driver to bring it to a stop within the assured clear distance ahead.”

No matter how you define ACDA, it adds up to one simple fact: as a driver, you’re responsible for leaving a safe distance between you and the vehicle in front of you. You should always leave enough room to stop – even if the other driver slams on his or her brakes and comes to a complete stop for no apparent reason in the middle of a 70mph freeway.

In most cases, the rear driver is at-fault for the rear-end collision because, no matter the circumstance, you should leave a safe distance between you and the car in front of you. There are some cases, however, as we mentioned above where the front driver will be found at-fault.