Lawmakers in Nebraska are working to implement three separate bills that would increase traffic safety regulation in the state. This could involve charging drivers with fines and increased insurance rates if they violate the laws. Some may not agree with the new measures but it should be common sense for everyone. 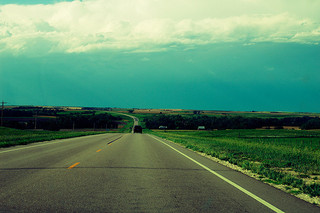 Learn what the state of Nebraska is doing to combat unsafe driving. (Image source – FLICKR)

Two of the bills are concerned with the usage of seat belts. Senator John Harms of Scottsbluff is sponsoring a bill that allows police to stop any driver that isn’t wearing a seatbelt. Currently, you have to be pulled over for another incident, like speeding or running a red light, to get a ticket for not wearing your seat belt. The bill is proposing changing the offense to a primary violation. Currently, 34 states and the District of Columbia have primary seat belt laws and other states have secondary violations for failure to wear a seat belt. New Hampshire is the only state that does not require seat belt use at all.

If Nebraska approves this bill, the fine would increase from $25 to $100 and add a point to your driver’s license. If you gain too many points on your license in any state, not only do you run the risk of losing your license but your insurance premiums could go up as well. The way to avoid accumulating points is to follow the law and drive safely. As a driver, you have a responsibility to make sure your passengers are safe as well which is why the Nebraska bill would also fine passengers for not wearing their seatbelts.

Harms says, “It’s all about safety. If you get seriously injured and your insurance runs out, then the state may end up taking over the cost. That’s one of my big concerns as well.”

If the state has to take over too many incidents, they then raise insurance costs which affect your average consumer. As long as drivers are safe and costs are low, insurance premiums can stay at an affordable level.

Another bill that will be heard by the Legislature’s Transportation and Telecommunication Committee is sponsored by Senator Bob Krist, from Omaha. While still concerned with seat belts, Krist’s bill takes a slightly different approach. This law will require all passengers to wear a seat belt, no matter where they are located. Right now, Nebraska does not require passengers located in the back seat to wear a seat belt. Although they have seats in front of them, backseat passengers can still maintain serious injuries in car accidents.

“It doesn’t make a lot of sense, “Krist stated in an official statement.  “In a crash, whatever is unbuckled in the back seat is going to come forward into the front seat. It just seemed logical to me that everyone in the vehicle should be belted.” This bill also supports Harms in the fact that it would change seat belt violation to a primary offense.

Senator Harms is sponsoring another bill that aims to upgrade the current law on texting and driving. In 2010, lawmakers considered making it a primary offense but some opponents claimed that it would be used as a tool for police officers to harass minorities and young people. Lawmakers found the argument convincing and made texting and driving a secondary offense. If you violate the law, there is an escalating series of fines that you face. A first offense for violation of the texting law will cost you $200, a second offense is $300 and any other subsequent offenses cost $500 and will earn you 3 points on your driver’s license. Texting and driving, even as a secondary offense, is expensive but if Harms bill is passed, then the fines could eventually go up as well.

Throughout the U.S., the battle against texting and driving is ramping up as the many dangers are discovered. Currently 39 states, Nebraska included, have some form of a ban on texting and driving and only 4 states don’t have primary enforcement. Senator Harms is hoping to change that in Nebraska.

2012 was a difficult year for Nebraska as far as traffic fatalities were concerned. After experiencing a decline for several years, traffic deaths rose by 14% when comparing similar time periods. This news came after the state had experienced one of the lowest death rates on record so it wasn’t surprising that many people stood up and took notice. The Nebraska Highway Safety Administrator Fred Zwonecheck believed “many fatalities involved unbelted drivers or passengers ejected from their vehicle during a rollover crash.” When circumstances begin to point to a common cause of traffic deaths, it’s only natural to want to fix that problem.

This is why many people in Nebraska support the efforts of Senators Harms and Kristi. Craig Bougher, a resident of Papillion, Nebraska has told various news sources that it was a crash that his daughter was involved in that finally “convinced him Nebraska needs to strengthen its seat belt laws.” A pick-up truck had hit his daughter’s SUV, sending her into a utility pole. While his daughter was okay, the driver of the pick-up truck had not been wearing a seat belt and was ejected from his truck upon impact. He died at the scene.

“I’m not out for another law, but at the same time, this guy died, and he didn’t need to,” Bougher said.