What Discounts Does 21st Century Offer for Auto Insurance?

By taking advantage of 21st Century Insurance’s discounts, you can save hundreds – even thousands – per year on insurance. 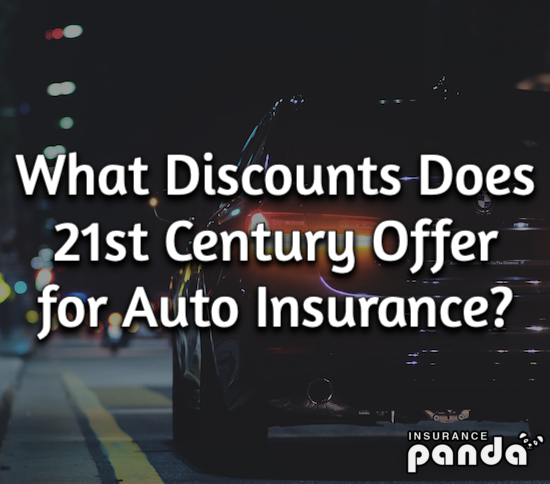 Some people bundle multiple insurance policies together to save money. Others take advantage of good student discounts, safe driving discounts, or other discounts.

21st Century Insurance claims safe drivers save an average of 20%. If you have had no tickets or accidents in the last three years, then you qualify for the company’s safe driver discount. You must have had your driver’s license for three consecutive years with no more than one point for moving violations over that time period. If you qualify, then you could save 20% or more on car insurance.

If you insure multiple vehicles with 21st Century Insurance, then you could save money across all insurance policies. This discount varies based on the number of cars and the number of drivers on your policy, but some drivers save hundreds or even thousands per year.

Switch to Save Discounts

Bundling multiple policies together with 21st Century Insurance can lead to 20% savings or more across all policies.

21st Century Insurance only sells car insurance. However, you can buy other insurance through its parent company, Farmers, which offers a full spectrum of insurance products.

21st Century Insurance offers dozens of insurance discounts for policyholders, ranging from safe driving discounts to bundling discounts. Depending on your situation, you could qualify for any of the following discounts:

Low Mileage Discounts: If you drive significantly fewer miles than the average driver, then you could qualify for a low mileage discount with 21st Century Insurance. Like most insurers, 21st Century Insurance rewards drivers who consistently have fewer miles than other drivers. Mileage requirements vary depending on your location, although the average American drives around 13,000 miles per year.

Driver Education Course Discounts: Have you recently completed a driver safety course? Many young drivers complete a training program before taking their license exam. Statistically, drivers who have completed safety courses are safer to insure. 21st Century Insurance may reward you with a small discount after completing your course.

Contact your 21st Century Insurance agent to ask about any available discounts.