Why Is Car Insurance so Expensive in New Orleans?

New Orleans drivers pay more for auto insurance than those throughout the rest of Louisiana and just about everyone else in the United States for a variety of reasons.  Chief among these reasons is the fact that the Crescent City is rife with particularly wide and deep potholes. Potholes are likely to cause flat tires, damage to the underbody of vehicles, and even lead to swerving that causes nasty collisions.  However, New Orleans’ pothole-laden streets are only one of the many reasons why New Orleanians pay more than others for auto insurance.

New Orleans is a Dangerous Place for Motorists and Their Vehicles 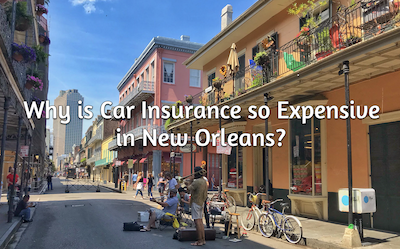 To say New Orleans is a dangerous place would be an understatement.  Those who live in New Orleans are that much more likely to have their vehicle stolen or damaged by thieves and vandals.  Part of the city’s particularly high frequency of auto theft can be attributed to its rampant poverty. Locals looking to make a quick buck are inclined to steal vehicles and flip them for an immediate influx of cash.  The mere fact that New Orleans has a disproportionately high prevalence of auto theft is justification enough to increase locals’ auto insurance rates.

Lawsuit abuse in the greater New Orleans area is another part of the reason why locals’ auto insurance rates are sky-high.  A surprisingly high number of automobile-related lawsuits are filed in New Orleans and Louisiana as a whole. Louisiana’s laws are slanted in favor of personal injury victims and their attorneys.  The Pelican State has a lengthy history of lawsuit abuse. Making matters worse is the fact that the New Orleans court system has a long-running integrity crisis.

The state’s elevated threshold for trial by jury is largely responsible for lawsuit abuse.  As a result, trial lawyers tend to escalate the value of their claims, spurring comparably large payouts.  New Orleans locals will testify to the city’s overly-litigious ways; it is difficult to turn on the TV in the Crescent City without being inundated by personal injury attorney commercials.  Auto insurance companies respond to this heightened risk for losses by jacking up locals’ auto insurance rates.

An Abundance of Uninsured and Underinsured Motorists

All in all, nearly 15% of Louisiana drivers lack auto insurance.  Furthermore, nearly 40% of the state’s drivers are underinsured. These drivers merely have the bare minimum in liability coverage as mandated by state law.  New Orleans is Louisiana’s most populous city so it makes sense that a disproportionately high percentage of the city’s drivers are uninsured or underinsured compared to other parts of the state.  It costs that much more for auto insurance companies to pay for damages after a customer is injured in an accident with an underinsured or completely uninsured driver.

Those driving in the New Orleans area are inclined to file bodily injury claims at a higher frequency than their fellow Louisianans and others.  Bodily injury claims are especially costly for auto insurance providers. As noted above, auto accidents in the state of Louisiana valued at $50,000 or less are heard before elected judges.  Though Louisiana is a deep red state, New Orleans is particularly liberal. Liberal New Orleans judges typically favor local drivers over supposedly greedy auto insurers.

Numerous studies show auto accidents are particularly common in New Orleans, partially because the city has comparably bad drivers.  This city tends to attract social deviants, party animals, and other miscreants. Such individuals are usually lacking in personal responsibility.  Furthermore, New Orleanians tend to consume more alcohol and drugs than those living in other cities. As a result, these revelers are that much more likely to be involved in an auto accident.

Louisiana Desperately Needs Tort Reform in Which the Loser Pays

Plenty of states such as Texas have enacted tort reform measures in which the loser of a lawsuit pays the costs to the victorious party.  If such tort reforms were passed in Louisiana, there would not be nearly as many unjustified lawsuits designed to make a quick buck. Frivolous lawsuits are especially common in New Orleans as the city is jam-packed with people, plenty of whom are living in poverty and looking for every opportunity to make a bundle of money as quickly and easily as possible.