How Much Do Self-Driving Cars Cost to Insure?

In the past decade, automobile companies have made strides towards making self-driving cars a reality. Many cars on the market already have self-driving safety features, with many more set to come out in the next several years. As an increasing number of people are purchasing self-driving cars, you might find yourself wondering how much they cost to insure. Here’s what you should know about self-driving cars and insurance before you make a purchase.

What Self-Driving Features Are Available Now? 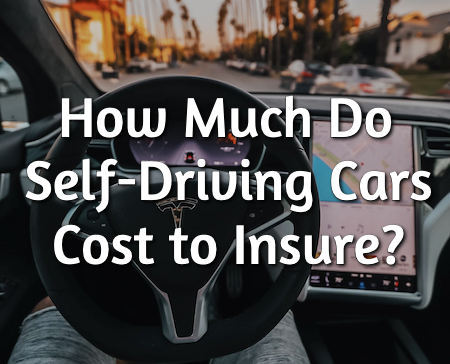 How Will Self-Driving Features Affect My Insurance?

Since self-driving cars are still evolving, it is unclear exactly how these features are going to affect your insurance costs in the long run. Ultimately, self-driving cars are actually safer than their manual counterparts, and self-driving safety features have been shown to reduce accidents. Because of this, you may receive discounts when insuring a car with self-driving safety features, and overall premium costs may get lower in the future. While manual cars rely on the driver for safety, a self-driving car works the same way every time, which statistically makes accidents less likely to happen. Drivers can still take control of the car when necessary as well.

However, since self-driving features are still relatively new and complex, they may be more challenging to repair. If you file a claim on a self-driving car, it could cost more for the insurance company. This could raise rates slightly because the cars are harder to repair. However, as self-driving cars become more common, the cost of the repairs will likely go down and insurance companies won’t need to factor this into their premiums.

How Will Self-Driving Cars Evolve in the Future?

We can expect self-driving cars to continue developing in the future, and we may even see cars that are completely autonomous on the road sometime in the next few decades. Many companies are working to develop completely driverless vehicles, with Google and Uber being two of the most notable. Tests have been done on these vehicles in the San Francisco Bay Area over the last several years as well. It will take several years before these fully autonomous vehicles hit the road, as they still require extensive testing, and public trust in the idea needs to grow. However, they show lots of potential and could completely change the way we travel.

There are many reasons why self-driving cars could change the game for drivers. Driving can be stressful, particularly in large cities with high levels of traffic congestion. If the majority of the cars on the road were self-driving, they would be able to communicate with each other to prevent traffic jams. This would make commutes shorter, and drivers would be able to relax and do other things during their commutes as well. Self-driving cars are also designed to prevent accidents and keep people safer – another key factor in congested cities.

Self-driving cars will also help to improve the environment. Climate change is becoming an increasingly important issue, and cars have had a very negative impact on the environment. However, many of the self-driving cars in development are electric, so they won’t put out the carbon emissions that a traditional car would. When implemented around the world, this could significantly reduce our total carbon footprint and help to preserve the planet. Some manufacturers are also looking at developing public self-driving vehicles that would support carpooling, which would also reduce emissions overall and prevent traffic congestion.

Overall, self-driving features are there to keep you safe and can make driving less stressful as well. Some insurers may offer discounts for those who use self-driving cars, while others may still be wary of the new technology. If you want to invest in this new technology, don’t let the potential cost of insurance stop you from doing it. This is a new trend where you will want to be ahead of the curve. When choosing insurance for your self-driving car, be sure to shop around and get many different quotes before making a final decision. Premium costs vary between companies, so you’ll want to compare all of your options just to make sure you’re not spending more than you have to on good coverage.