How Many Miles Does the Average American Drive Each Year?

Car insurance is all about risk. The number of miles you drive each year plays a crucial role in determining your risk. 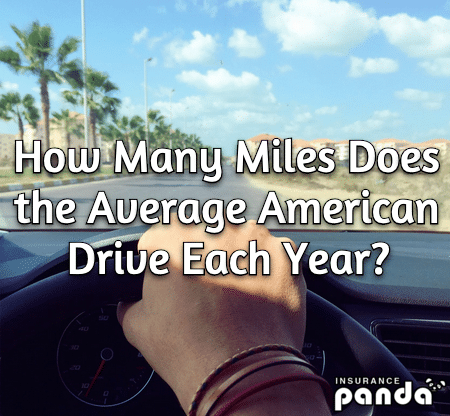 According to most insurance companies, the average American drives 10,000 to 15,000 miles per year.

Of course, average mileage varies widely. Drivers in downtown New York, for example, tend to accumulate fewer miles on their vehicles than drivers in suburban Houston or rural Wyoming.

Insurance companies use dozens of factors to calculate insurance premiums – including average mileage. Today, we’re explaining everything you need to know about average annual mileage and how it works.

Insurance companies have their own definitions for “average mileage”, and this definition varies between cities and states.

However, the United States Department of Transportation’s Federal Highway Administration reports that the average American now drives an average of 13,476 miles per year.

Average mileage has risen in recent years. Today, the average American drives over 1,000 miles per month.

Here are some important notes from the latest average annual mileage report:

Young drivers have low annual mileage when they first start driving. As they enter working-age, annual mileage increases. Towards retirement and beyond, mileage drops significantly.

Someone living in an urban area with good public transportation is expected to drive fewer miles per year than someone who lives in a rural area 50 miles from the nearest town.

The Department of Transportation releases annual reports that back up this concept. Generally, drivers in rural, sparsely populated states put significantly more miles on their vehicles than drivers in more densely-populated urban areas.

Drivers in Wyoming, for example, drive over 21,500 miles per year – more than any other state.

Oklahoma, New Mexico, Minnesota, Indiana, and Texas are also among the top ten states with the highest average annual mileage, with the average driver in each state driving more than 16,000 miles per year.

Other states have the lowest average annual miles per year. Drivers in Washington D.C., New York, Rhode Island, New Jersey, Illinois, and Massachusetts all drive fewer than 8,200 miles per year, on average. These are also some of the most densely populated states in the country.

There are a couple of surprising states on the list: many are surprised to discover that drivers in Alaska drive fewer miles per year than drivers in virtually any other state, for example. Alaska is a big state, yet it has fewer miles of roadway than many smaller states. Hawaii has low mileage for similar reasons: there just aren’t as many roads in Hawaii and Alaska compared to other states.

How Does Total Mileage Impact Your Auto Insurance Rates?

In fact, mileage only really matters in car insurance if you drive a lot of miles or very few miles.

If you drive significantly more miles than average, then you’re a higher risk driver to insure. Even if you’re the world’s safest driver, you spend significantly more time on the road than the average driver. That means more chances of accidents, collisions, and other incidents. Driving a lot of miles could slightly increase car insurance rates.

If you drive significantly fewer miles than average, you are considered a less risky driver to insure. You spend less time on the road than an average driver, which means fewer opportunities to get into a collision or an accident. Many low mileage drivers also drive during off-hours (say, outside of rush hour). You may not have a normal 9 to 5 job like the average driver, which means you’re not driving during accident-prone times of the day. You could pay slightly less for car insurance as allow mileage driver.

If you drive fewer than 5,000 miles per year, then you could pay 10% to 20% less for car insurance than the average driver.

If you drive between 7,500 and 15,000 miles per year, then you should pay relatively normal prices for car insurance. You don’t pay a premium based on your mileage, but you don’t save money either.

Car insurance companies track this data in several ways. Some ask for your normal commute. Others use average driving distances in your city or ZIP code.

Or, some insurance companies give drivers an incentive to install tracking systems on their vehicles. You might receive lower premiums for installing your insurer’s app, for example, with the opportunity to get even cheaper premiums if you qualify for low mileage.

How to Qualify for Low Mileage Insurance Discounts

If you work from home, for example, and only leave the house to get groceries, then you will accumulate much fewer miles per year than someone who commutes back and forth to downtown every day.

Some insurers will let you qualify for low mileage discounts simply based on your reported annual mileage. You might report that you drive fewer than 8,000 miles per year, for example.

Other insurers offer a more substantial discount if you install a driver tracking system. These telematics systems track average mileage and driving habits, then provide a discount based on this data.

If you believe you drive significantly fewer miles than the average person, then ask your insurance company about usage-based insurance and other low mileage insurance discounts.

How Else Can You Lower Your Auto Insurance Rates?

Besides low mileage discounts, there are several other ways to lower auto insurance rates. By taking advantage of these discounts, you can pay significantly cheaper car insurance premiums than an average driver – especially if you maintain low mileage status.

Here are some of the other discounts that could be available to low mileage drivers:

Non-Rush Hour Discount: Some insurance companies have a separate discount based on the time of day you drive. If you consistently drive outside of rush hour, for example, then you could qualify for this discount. Some insurers bundle this discount with a low mileage discount, while others calculate it differently.

Safe Driving Discount: If you have no accidents, speeding tickets, or other incidents within the last 3 to 7 years, then you could qualify for cheap rates on car insurance. Depending on your state and your insurance company, you should qualify for a safe driving discount with a few years of clean driving. Many low mileage drivers also qualify for a safe driving discount because they spend less time on the road and receive fewer citations.

Paid in Full Discounts: Pay your car insurance in full every 6 to 12 months instead of monthly, and you could save 5% to 10% per ear on car insurance.

Bundling Discounts: If you insure multiple vehicles on one policy, or if you have multiple insurance products with a single company, then you could qualify for bundling discounts with most companies.

Good Student Discount: Many insurers now offer good student discounts to drivers under age 25 who maintain a 3.0 GPA average or higher in high school or university.

Homeowner Discount: Statistically, homeowners are safer to insure than renters. If you own a home, then you could qualify for a homeowner discount.

By taking advantage of all of these discounts and more, you could save hundreds – even thousands – per year on car insurance.

So, How Many Miles Does the Average Person Drive a Year?

However, average annual mileage varies widely across genders and demographics. Teenagers and adults over 65, for example, drive significantly fewer miles than working-age adults between ages 20 and 64.

James Shaffer James Shaffer is a writer for InsurancePanda.com and a well-seasoned auto insurance industry veteran. He has a deep knowledge of insurance rules and regulations and is passionate about helping drivers save money on auto insurance. He is responsible for researching and writing about anything auto insurance-related. He holds a bachelor's degree from Bentley University and his work has been quoted by NBC News, CNN, and The Washington Post.
Back to Top