Is It Possible to Find Cheap Car Insurance in Chicago?

By shopping around, comparing quotes, and finding an insurer that matches you and your vehicle, you can find the cheapest possible car insurance in Chicago. 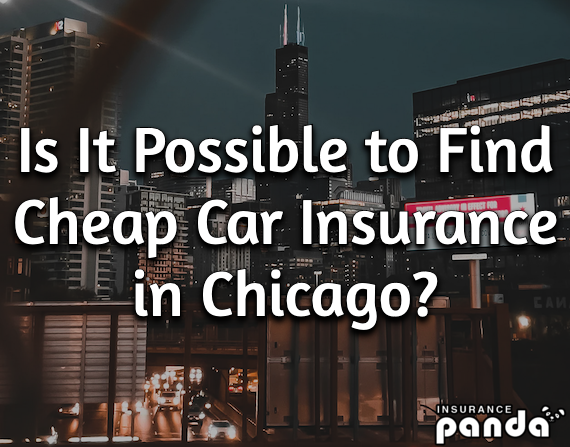 Why Is Car Insurance Expensive in Chicago?

There are several reasons why car insurance is expensive in Chicago.

Illinois has cheaper-than-average car insurance premiums compared to the rest of the country.

The average driver in Illinois pays around $1,213 per year for car insurance, which is more than $200 less than the nationwide average of $1,450 per year.

Vehicle Theft Rates Are Lower in Chicago than Other Cities

That’s not the case in Chicago, however: Chicago has surprisingly low vehicle theft rates compared to other cities of its size. Chicago is rarely in the top 100 cities nationwide for vehicle theft.

Chicago is one of America’s largest cities. The Chicago metropolitan area is home to around 9.5 million people, making it the third-largest metro area in the country.

Despite having so many people, however, Chicago has a lower population density than New York City, Los Angeles, Miami, Boston, and other major metro areas.

In fact, the densest municipality in the Chicago area, Stone Park, is the 37th most densely populated city in the country, behind dozens of cities in the metro areas of New York City, Miami, San Francisco, Philadelphia, Boston, Miami, and even Louisville.

Other densely-populated Chicago-area cities include Cicero, Berwyn, and Elmwood Park, all of which are even further down the list.

How to Get Cheap Car Insurance in Chicago: Tips and Tricks

Adjust Coverage: Some drivers buy minimum liability insurance for a few hundred dollars a year in Chicago. Others buy full coverage car insurance for a few thousand dollars per year. You can adjust coverage to match your needs, risk tolerance, and vehicle. If you have an older, used vehicle, for example, then you may be able to drop collision and comprehensive coverage to save money.

Take Advantage of Discounts: Every insurance company in Chicago offers discounts. You can get discounts for bundling auto insurance, being a safe driver, getting good grades at college, and driving fewer miles per year than average, among other factors.

Sign Up for Driver Tracking: Most major insurers now offer a driver tracking (telematics) program. You join the program, then let the insurer’s mobile app track your driving habits. The app tracks your speeding, acceleration, average mileage, and more, then provides customized car insurance rates based on this data. A good driver in Chicago could save 30% by signing up for driver tracking.

Certain Chicago insurance companies are known for offering cheaper insurance than others. By shopping for car insurance from these providers, you can pay lower-than-average car insurance premiums.

The best cheap car insurance companies in Chicago include:

The rates above assume you’re an average, middle-aged driver with a proven history of safe driving. Some drivers will pay even less for car insurance in Chicago, while others will pay slightly more.

Credit Score: Illinois allows insurers to use credit scores to calculate insurance rankings. If you have a low credit score, you could pay thousands more per car insurance than drivers with a high credit score.

Driving History: Drivers with a speeding ticket, DUI, at-fault accident, or other incidents will pay more for car insurance than drivers with a clean record.

Vehicle Type: Insurers consider the crash safety rating, accident statistics, and other data for your vehicle when assigning rates. Based on your vehicle make and model, you could pay significantly more or less for car insurance in Chicago.

Other Factors that Raise Car Insurance Premiums in Chicago

Chicago has several unique factors that raise car insurance premiums across the city, including:

Winter Driving: Winter makes driving hazardous in Chicago. It increases the risk of accidents, and insurers pass this higher risk to policyholders through higher insurance premiums.

Rising Repair Costs: Repair costs rise every year in Chicago. It costs more to repair a car today than it did five years ago. Insurers pass these higher costs to policyholders.

Rising Medical Costs: Insurers may need to cover medical bills for drivers, passengers, and pedestrians after an accident. Medical costs rise sharply every year, and insurers pass these higher costs onto policyholders.

Chicago has the same car insurance requirements as the rest of Illinois. Per state insurance law, drivers in Chicago must carry the following minimum coverage options:

Insurers express this policy as a 25/40/50 plan. Many drivers buy extra coverage for added protection and peace of mind. However, any policy that meets these minimum requirements is compatible with state insurance laws.