Why Is Car Insurance in Colorado So Expensive?

Have you recently moved to Colorado and updated your car insurance? Or are you a twenty-something just now moving off your parents’ insurance? Did the sticker shock of the cost to insure your vehicle in the Centennial state make you feel like you grabbed an electric cattle fence? 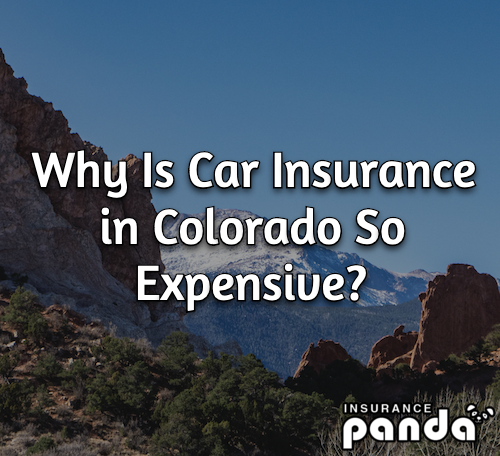 You’re not alone in thinking that the cost of insurance a jacked up a bit on the high side. Colorado is not the most expensive state – according to rankings on insure.com, there are nine states plus Washington DC ahead of Colorado. However, it is definitely higher than average. Currently, the average cost for full coverage in Colorado is $1,741. The national average, by comparison, is $1,517. Michigan ranks number one, so if you moved to Colorado from there, you are probably pretty pleased with your rate. However, if you moved here from one of the 39 states who are less expensive, you might be freaking out a little at the cost.

But WHY are Colorado rates yanking so much money out of your wallet? And why do costs vary from state to state?

Insurance Is a State Thing (Not Federal)

The federal government doesn’t control rules and regs for car insurance, so there isn’t national uniformity. Each state has its own department of insurance and is responsible for determining the state’s rules and regulations for insurance. The differences in these rules can vary considerably and can affect your rates.

For example, some states are no-fault states where the driver of the vehicle is legally and financially responsible for any injuries or damage to their own vehicle no matter who was at fault in an accident. Other locations are tort or at-fault states where the financial burden of responsibility is contingent upon what percentage the driver of each vehicle is found to be at fault. In other words, everybody pays for their own property in some states, while in others the person who causes the wreck has to pay everybody’s bill. Lawsuits over fault can still happen in no-fault states, but they are usually more limited.

Another variation involves compulsory laws. Almost all states have a compulsory insurance requirement. However, they vary in the amount of insurance liability and the types of liability they require people to carry. Some of the higher cost states require drivers to carry personal injury protection for themselves, for example. Others let drivers only carry liability to cover anyone they hit while allowing them to use their general health insurance to cover medical costs for themselves.

Every state has a different level of minimum liability requirements. For Colorado, those requirements are as follows:

States that have a higher cost of living typically also have higher insurance rates. The cost of living is heavily influenced by things like housing, health care costs, and food. States such as Hawaii, the District of Columbia, California, and New York are considered some of the most expensive states in which to live. By comparison, New Mexico, Missouri, Oklahoma, and Arkansas are the least expensive places to live.

The cost of living in Colorado is only about 5% above the average in the United States, but that still makes it more expensive for insurance than many other states.

The more people you have in an area, the higher the statistical chance of accidents happening. Obviously, a lone car driving down a rural highway or a small town lane is not as likely to wreck as a car driving on a congested city street or highway. Damage from vandalism or theft can be more likely in higher population areas as well.

Higher density often correlates to more commuting time. If you live on the outskirts of Denver and have to commute into the city for work with thousands of other commuters, the increased driving time and miles in heavy, dense traffic will increase your risk.

Blame it on the Weather

Although overall, the weather in Colorado is beautiful, the mountains can make the weather unpredictable at times Nationally, adverse weather contributes to approximately 21% of crashes, according to the US Department of Transportation Road Weather Management Program web page. And when Colorado gets snow, accumulation can easily be 20 inches. That can definitely make driving challenging.

While snow and ice may contribute to wrecks, other types of weather-related damage can occur also. In 2017, Colorado experiences a large hailstorm in the month of May that caused 1.4 billion dollars in damages, a record at the time. In 2020, Colorado saw an increase in wildfires. Extreme weather events like these have led to higher premiums because of the property damage they can cause.

According to the Reason Foundation’s 25th Annual Highway Report, Colorado does well in rankings when it comes to maintaining rural roadways. But the rural interstate pavement conditions are not as rosy. According to the report, Colorado joins with Alaska and Washington in sharing 32% of the nation’s rural interstates that are in poor conditions. https://reason.org/policy-study/25th-annual-highway-report/rural-interstate-pavement-condition/

Costs Are Increasing Faster Than Average

The average premium for insurance between 2011 and 2017 increased by 54.2% in Colorado compared to the national average of only 20%.

In the end, it seems there are many reasons why the cost of insurance in Colorado is so expensive, but there are still things that you can do to reduce your rate. Keep your car in good condition, especially your tires and breaks, to make your car safer to drive. Drive safely – stay sober, drive the speed limit, take a defensive driving course if you haven’t already. Watch the weather reports before traveling and be prepared for emergencies. All these things can reduce the likelihood of claims. Keeping an eye on your credit score can help too since many insurance companies base your insurance rate partly on how good your credit is. And remember, while car insurance may be higher in the Rocky Mountain state, you can’t beat the view or the skiing.