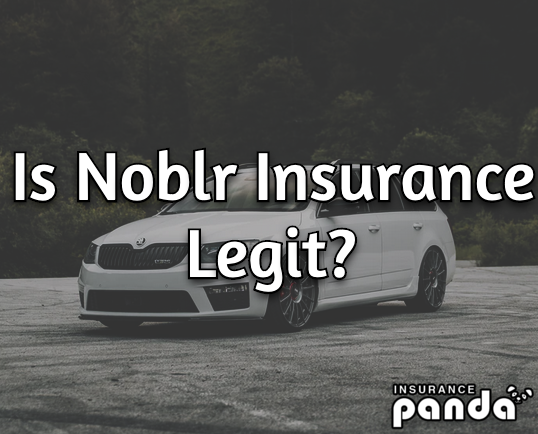 Noblr is a car insurance company founded on the slogan, “the less you drive, the more you can save”. The company primarily does business online, offering free auto insurance quotes through its website at Noblr.com.

Noblr tracks driving behavior using an app. The Noblr app turns your phone into an “insurance copilot”, according to the company. The app analyzes your driving habits, and you receive a driving score after each ride. If you consistently drive safely, then you can save money on car insurance. Drivers who drive fewer miles than average can also save money on car insurance.

How Does Noblr Track Driving Behavior?

Noblr tracks driving behavior using the sensors on your phone. The Noblr app connects to your phone’s sensors – including your GPS and accelerometer. Then, Noblr interprets movement data and assigns a driving score to each ride.

Based on all this data, Noblr assigns a risk score. If you drive during safer times, spend fewer miles on the road, and follow the speed limit, then you’ll pay less for car insurance than a driver who drives during rush hour, frequently speeds, and commutes 100 miles per day.

Some of the items tracked by Noblr include:

Smoothness: Do you brake smoothly and accelerate smoothly? Or do you slam the pedal down? Smooth driving is safe driving. Someone who frequently brakes hard, for example, is more likely to experience a rear-end collision.

Road Choice: Some roads are safer than others. If you frequently drive on eight-lane freeways during your commute, then you could pay more for car insurance than someone who drives on a remote rural road in the countryside.

Mileage: Noblr considers mileage when assessing premiums. The more miles you spend on the road, the more chances you have for an accident. The average American drives 10,000 to 12,000 miles each year. If you drive significantly fewer than average miles, then you could save considerably on car insurance.

Ways to save with Noblr include:

Noblr has a different discount system than other car insurance companies. While other insurers give discounts for bundling policies or being a good student, Noblr emphasizes usage-based insurance, which means you’re already paying effective insurance rates based on your unique driving habits.

Noblr does, however, award discounts for certain behaviors:

Buying a Policy: Noblr gives a reward when you buy a policy with the company for the first time.

Paid in Full: If you pay your premium in full upfront (instead of making monthly payments), Noblr will give a small discount.

Renewal: When you renew your policy with Noblr, you may receive a small discount.

Referral Program: If you are a current Noblr customer, you receive $25 for every friend you refer to the company.

How Does the Noblr App Work?

The Noblr app is available for iOS or Android. You install the app, login, then follow the prompts to setup the app for the first time.

Noblr’s app uses your phone’s onboard sensors. You need to enable location and motion tracking when installing the app. You must set both these settings to ‘Always Allow’. Otherwise, the app will not work correctly, and Noblr cannot log trips or assign a personalized Driver Score.

On iOS, you need to enable iOS Motion & Fitness to log trips and calculate your Driver Score. The Noblr app prompts you to activate these settings.

Each driver on your policy needs to download the Noblr app. Noblr calculates each driver’s Driver Score individually based on their unique driving behavior. To add a secondary driver, the primary driver needs to send an invitation from within the Noblr app to each driver’s iOS or Android smartphone. Tap Settings > Additional Drivers > Send Invitation.

What Does Noblr Do With Driving Data?

Many drivers are uncomfortable sharing personal driving data. People don’t want an insurance company to know everything about their driving habits, including where they drive, how often they drive to those places, and what times of day they drive.

“Noblr collects data about how and how much its members drive because they have chosen to share it with us via their phones. We work with technology partners to help us do the math that gives you the best possible rate.”

Noblr does not claim to sell driver data to advertising partners. They use your data to calculate insurance premiums.

You are permitted to make three roadside assistance requests for every 6-month policy term, which is generous compared to other insurers. Other insurance companies allow 2-3 calls in each 12-month term.

Hippo is another internet-based insurance company that emphasizes smart savings for tech-savvy customers. Customers can save up to 25% on homeowners insurance and get a quote within 60 seconds.

Noblr does not offer bundling discounts or multi-policy discounts to customers who have both Noblr and Hippo insurance policies.

Noblr is a car insurance company that aims to use technology to give you customizable insurance rates. Based on your driving habits and mileage, you might pay higher or lower rates than the average driver. Safe drivers can get rewarded, while riskier drivers pay a little more.

Generally, Noblr is well-reviewed by policyholders. The company works particularly well for safe drivers who want lower rates. It’s also popular for those who don’t drive often – like anyone working from home.

Anyone can request a quote through Noblr today by visiting Noblr.com.