2 – 3 Cups of Coffee Per Day Makes You a Safer Driver, New Study By InsurancePanda.com Shows

Caffeine, the powerful stimulant found in coffee, gives millions of Americans an extra boost everyday. Many people drink coffee to focus at work, or even to get out of bed in the morning. A set of qualitative, behavioral experiments suggest that coffee has yet another use – to improve focus on the road.

Therefore, last month, InsurancePanda.com shed some light on the possible relationship between coffee consumption and driving performance and also started to poll its visitors in a survey. Now, the survey results are in.  Together, with the help from students from New York University we can now draw this conclusion:

At InsurancePanda.com, we surveyed 100 United States visitors using a ten question survey design. Our results showed that coffee has a strong effect on driving performance, while too much coffee seems to have an adverse effect.

77% of those surveyed said that they drink coffee shortly before or while driving. 69% of respondents said that drinking coffee helped them stay focused on the road.

Splitting the sample into subgroups revealed that of respondents who drink 2 cups of coffee per day, 80% say that coffee helps them focus while driving. 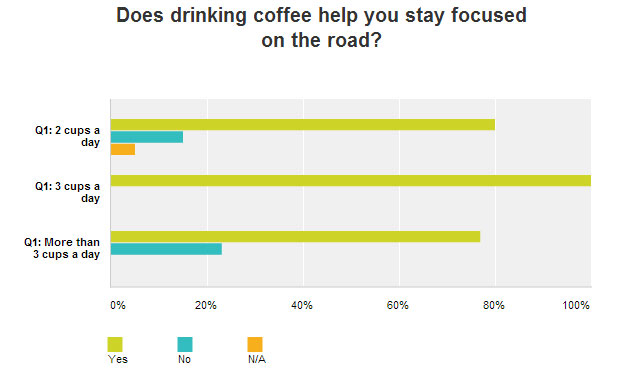 80% of 2 cups a day coffee drinkers and even 100% of those who drink 3 cups a day feel that coffee helps them stay focused on the road. However, starting at 3 cups a day control variables like objective driving history exhibits a correlation with riskier driving behavior. 2 cups to a maximum of 3 seems to work best for most drivers.

On the other hand, of respondents who drink more than 3 cups of coffee per day, only 76% said coffee helps them focus on the road. Moreover, the same sub-sample is also more likely to fall asleep behind the wheel and is slightly more likely to have a difficult driving record – as measured by the number of accidents in the past or DUI violations. 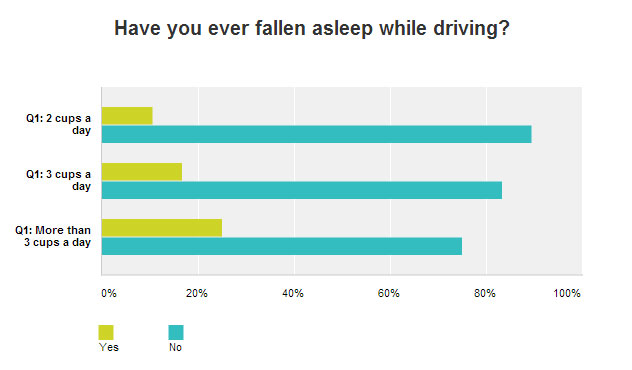 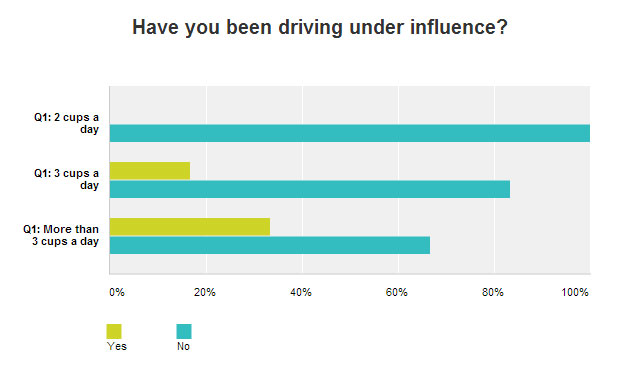 The result holds true for other risky driving behavior, such as driving under influence: heavy coffee drinkers engage in riskier habits

The results from InsurancePanda.com’s data set are in line with previous research as cited in the initial blog post. An article published in the medical journal “Sleep” found during a behavioral experiment coffee drinkers to perform better during nocturnal driving. Similarly, another behavioral study published in the magazine Psycopharmacology found drivers to be better perfoming after coffee consumption when compared to the control groups.

InsurancePanda.com’s findings are in line with the former studies, but also add further insight to the existing body of research. The sample at hand can be divided into light coffee drinkers, moderate coffee drinkers and heavy coffee consumers. Moderate coffee drinkers do not only feel more focused on the road, but have also a better driving history. Heavy coffee consumers, however, seem to have a higher propensity to consume otherwise stimulating substances and to suffer from insomnia. Whether these are the result of higher coffee consumption or something else that needs to be examined with further research, a quite sure insight is that 2-3 cups of coffee a day seem the optimal amount of caffeine for safer driving.

InsurancePanda.com surveyed it’s visitors in late January 2013 to add more data to the existing body of research regarding the relationship between coffee consumption and driving abilities. They questioned 100 United States participants in a 10 part survey on their website, including control questions for age and sex, as well as other variables which may affect driving performance and/or coffee consumption such as insomnia or affinity to alcohol/stimulants (as measured by DUI history).

While the data set may not satisfy all requirements for a statistically highly significant analysis (unknown selection effect due to non-randomized survey participation, relatively small number of participants), the data set still gives qualitative valuable insights and allows to derive new hypothesis which point future research into a new direction.